After returning home in December to start her first semester at med school, Jessa flew back down to meet me in Santiago on the 4th of July. The next day was my birthday and I couldn’t have imagined a better present. With South American winter in full swing, or so we hoped, we set out to get some time in on skis. One of the better options for touring close to Santiago is the Cajon del Maipo, and after a few days in Santiago we headed there. Before leaving we had met a french couple who had become trapped in the area in their motorhome for over a month when a massive storm deposited 10 feet of snow a few weeks earlier. They recommended sleeping down low to avoid a repeat of their lengthy confinement.

We had a short weather window to work with before another sizeable storm was scheduled to come through. Arriving late we worked our way up the dirt mine access road in the dark to get into the canyon. Along the way we were stopped by mine workers in trucks offering dire warnings about the dangerous weather arriving in a few days, and did we know that a french couple was stuck up here for a month after the last storm? Well yes, we actually did.

At the mine gate we were turned back by the security guards who said we needed to go to the mine office in Banos Morales and get a permit in the morning before entering. I wasn’t aware of such a requirement, but my information was a few years old so it seemed plausible that things had changed. We turned around and drove back down the valley and spent the night in town. In the morning we asked around, but no one had ever heard about a mine office there. They sent us back up the mining road to a loading site for trucks where we asked around some more. We were told that no permit whatsoever was required to drive up the road. How strange.

So we climbed the rough road once again to find the same two guys manning the gate as last night. They must have had a hell of a long shift. Looking uncomfortable they asked me if I had my permit. I explained our findings in the valley below, not making much of an effort to hide the fact that I was not super happy about being turned back on false information. They conferred briefly and let us through after the same safety briefing the other miners gave us. It’s possible that they were incompetent, or just amusing themselves by playing screw the gringo, but I think they were probably trying to deter us after what had happened to the french couple.

It’s possible to drive right into the mouth of the Cajon del Maipo, but you need 4wd to make it. I know this definitively because we tried and got stuck two thirds of the way up. I was forced to reverse dead slow about 500m down the narrow steep dirt track while Jessa walked alongside and guided me.

We parked in a small lot at the second mine gate and got our gear together. Cerro Arenas rose above us showing off a trio of tasty looking 1000m long couloirs. My mouth was watering just looking at the things. Upon trying to set off we were once again delayed when the gate attendant informed us they would be blasting in 30 minutes and it would be best if we waited. 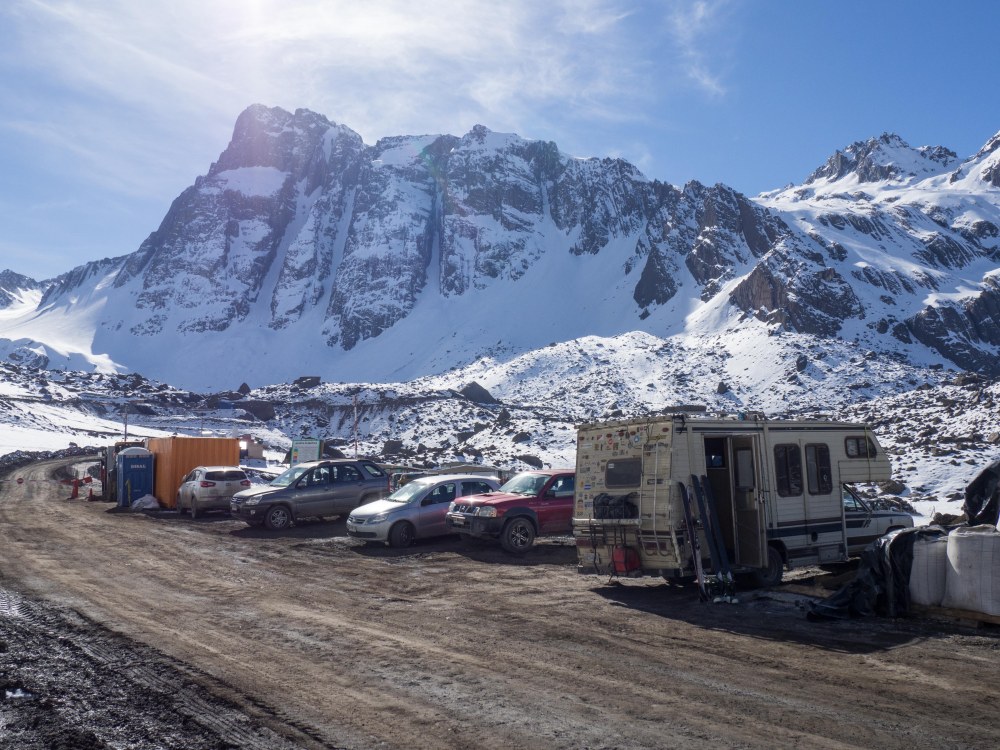 Eventually we heard the echoing boom of dynamite like the start gun in a track race and we started skinning up the valley. The snow was boiler plate hard. Once in the canyon we negotiated a tricky creek crossing, keeping our feet mostly dry, and started climbing wind scoured slopes below the alluring couloirs. Unfortunately time was running out. We had taken too long to get up there. The bulletproof snow conditions that weren’t overly enticing either. Skinning was becoming difficult as the slope steepened, so we elected to call it and turned around to rip some turns on groomer like hard pack back down to the valley. 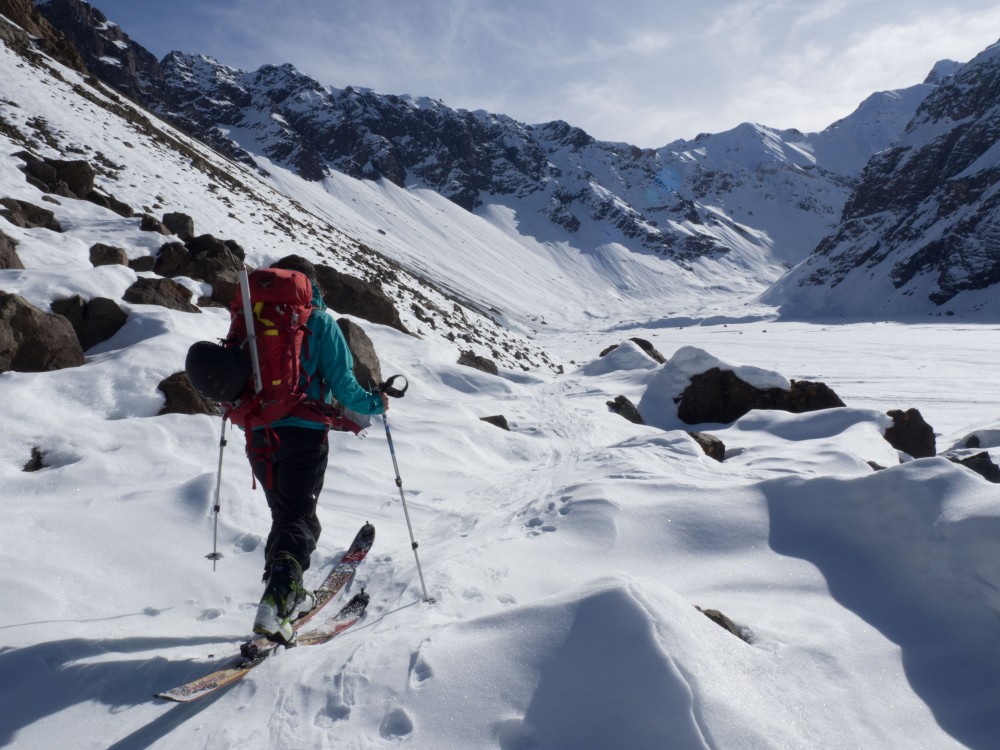 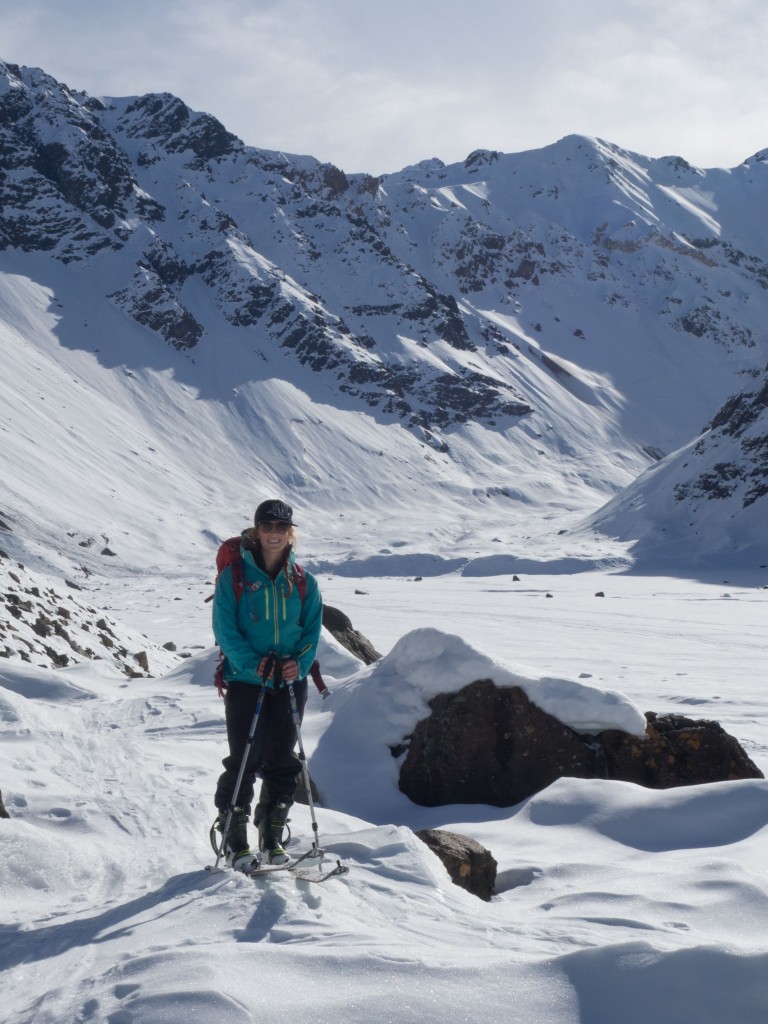 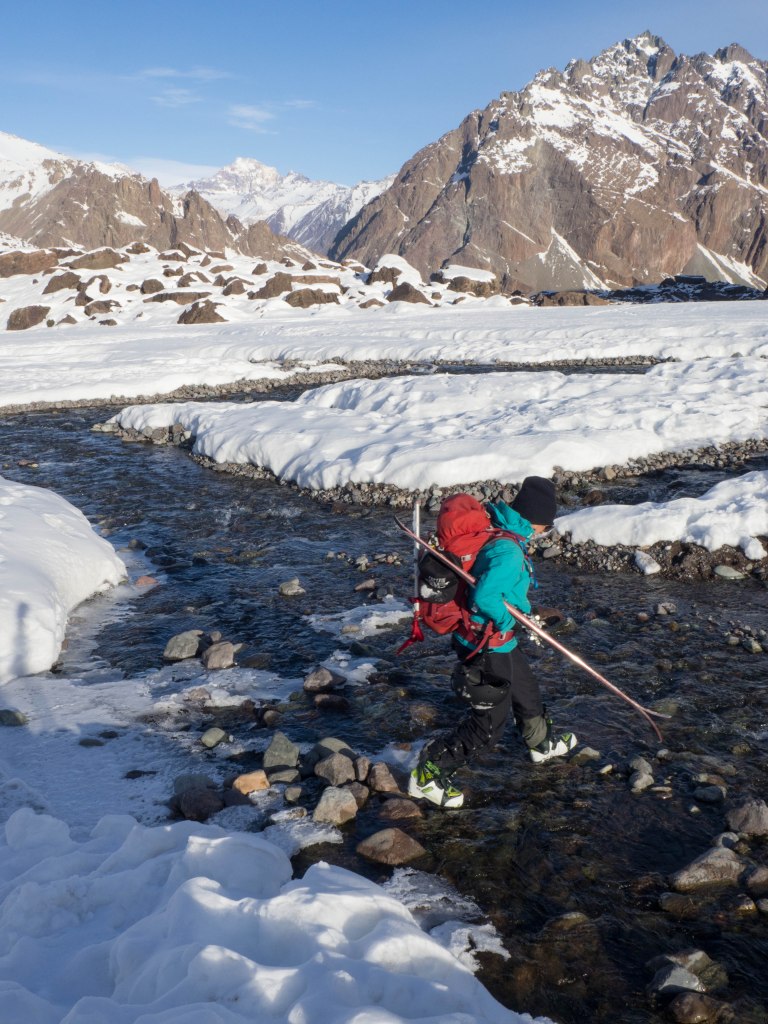 We didn’t get to taste the big couloirs, but it still felt great to be back out ski touring for the first time since last August, a year ago in Alaska (Huayna Potosi didn’t really count as ski touring). Most of all it was great to be back on skis with Jessa and, to quote The Talking Heads, nothing is better than that.