We found some spectacular terrain in El Cajon del Maipo near Santiago, but when we were there the snow conditions weren’t ideal. It was time to start heading south so we set out for Nevados de Chillan in search of better conditions. This area had been recommended to me a few times on my journey south, for both the quality of the resort and the backcountry nearby.

When we arrived at the resort we were disappointed to find a closed gate with an attendant telling us the lot was closed for the day. He said we were welcome to sleep in a small lower lot just below. It was sloping and not really ploughed. We pulled in and promptly became stuck. With each attempt to reverse out we slid sideways until we were firmly embedded in a snow bank at the side of the lot. We had to put the front chains on as well as the back and shovel for an hour to get the camper turned around and out of the lot. Defeated we made our retreat back down to the town of Las Trancas for the night.

In the morning we climbed back up the access road, but once again the gate was closed. Luckily we arrived just after another group who it turned out were also trying to go touring. We followed them to a lower lot where we could access the backcountry. It couldn’t have turned out better as we now knew where to go and we got to spend the day skiing with a great group made up of two French Canadians, an Aussie, a couple from the United States, and a random dog that tagged along and served as our mountain guide for the day.

We toured up the side of the resort on a cat track that wound its way through hills and eventually brought us above tree line. Then we transitioned to navigating a myriad of lava flow gullies in the alpine. Up here it was clear that coverage was thin. Black volcanic rock was showing through everywhere. The weather was starting to turn, so we contoured back to the resort hoping to find some powdery runs the day before opening. 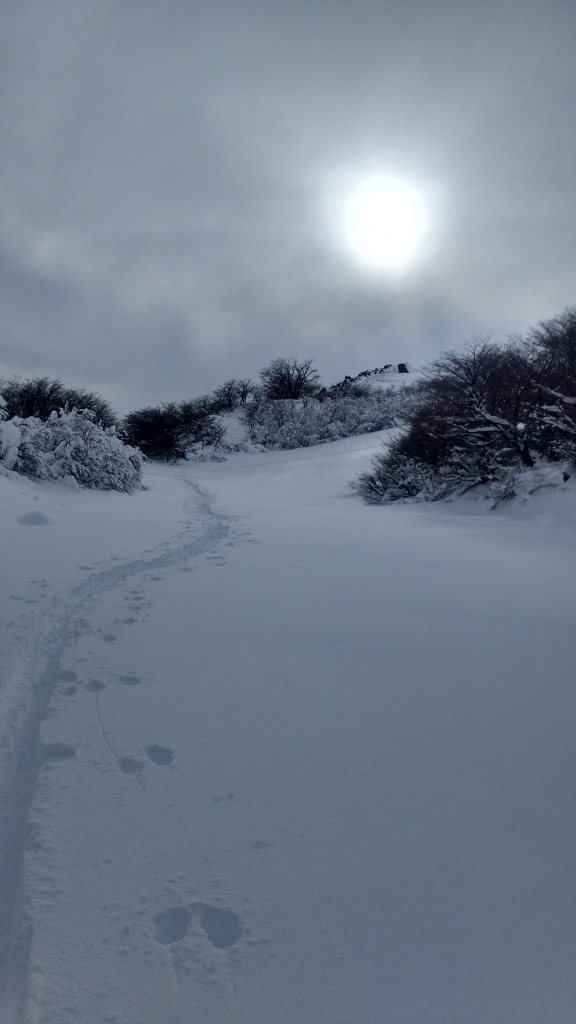 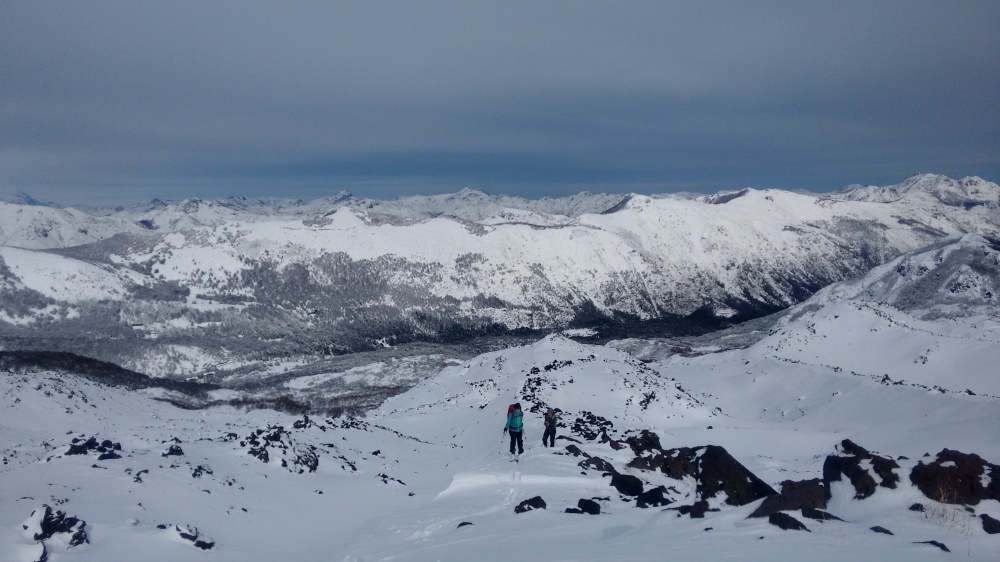 Our first run treated us to some good skiing, but ended in a horrible looking steep bushy gully with an open creek at the bottom. Drawing on past experience with similar features we elected to skin back up and get onto one of the runs in the resort. Snow cats were busy grooming for opening day, but we still snagged some fun turns in good snow on the sides. We finished the day with beers and a burger at the bar Ocho Loco back down in Las Trancas. It was awesome to finally ski some powder, especially with new friends. One of our new American friends Alex contributed some great photos to the blog, check out his website mountaindinosaur.com for more great mountain photography! 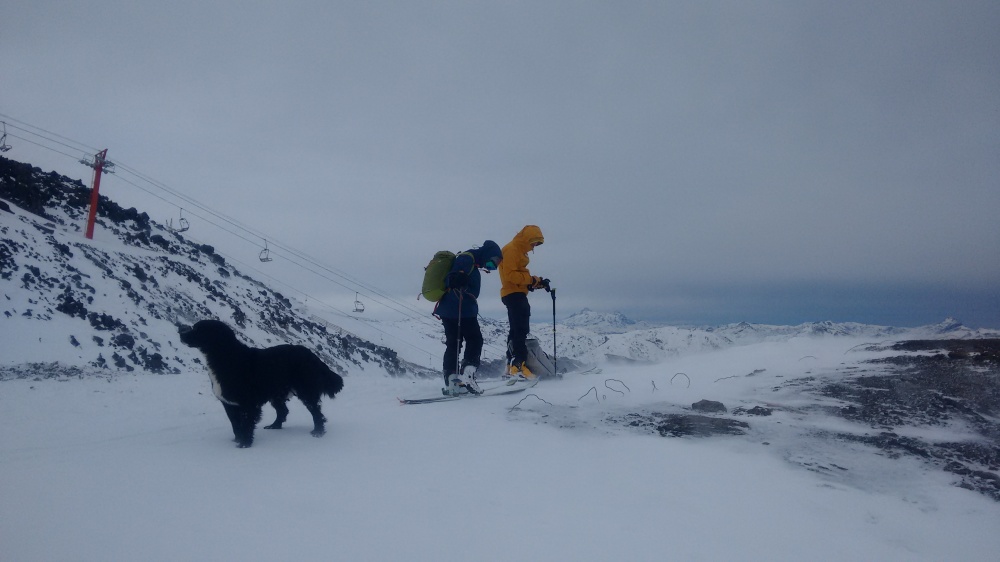 We did some work on the camper while the next storm rolled through, and returned to the hill two days later on opening day. On the road we spotted Paddy, our Aussie buddy from the first day, and pulled over to pick him up. We couldn’t really just get Paddy, so we squeezed in his buddy Helge from Germany, and a Norwegian-Chilean couple Thea and Alvaro. Just like that we had another great crew to head to the mountains with.

Jessa and I were hoping to get a backcountry pass and aim for Volcan Nevado Chillan. Unfortunately it was no longer available, so we were stuck skinning from the bottom of the resort. We parted ways with our new friends and started skinning up. Patrol promptly stopped us but we managed to talk our way through and picked a direct route on lookers right of the hill. Conditions were phenomenal with 20cms of fresh pow. I watched with dismay as resort skiers shredded it while we climbed self-propelled. This is the problem with touring at a resort! After a few hours we got above the lifts and I felt much better. We contoured through big impressive alpine terrain towards the summits of Volcan Chillan Nuevo and Volcan Chillan Antiguo, skiing past vents leaking pungent volcanic gases. We didn’t have time to bag a peak, but the views were nonetheless spectacular and it was a perfect windless bluebird day. We enjoyed lunch on the side of the volcano and then skied 1200m of hero snow back to the parking lot in the evening light. The icing on the cake was a rejuvenating dip in the conveniently unattended hot springs above the resort! 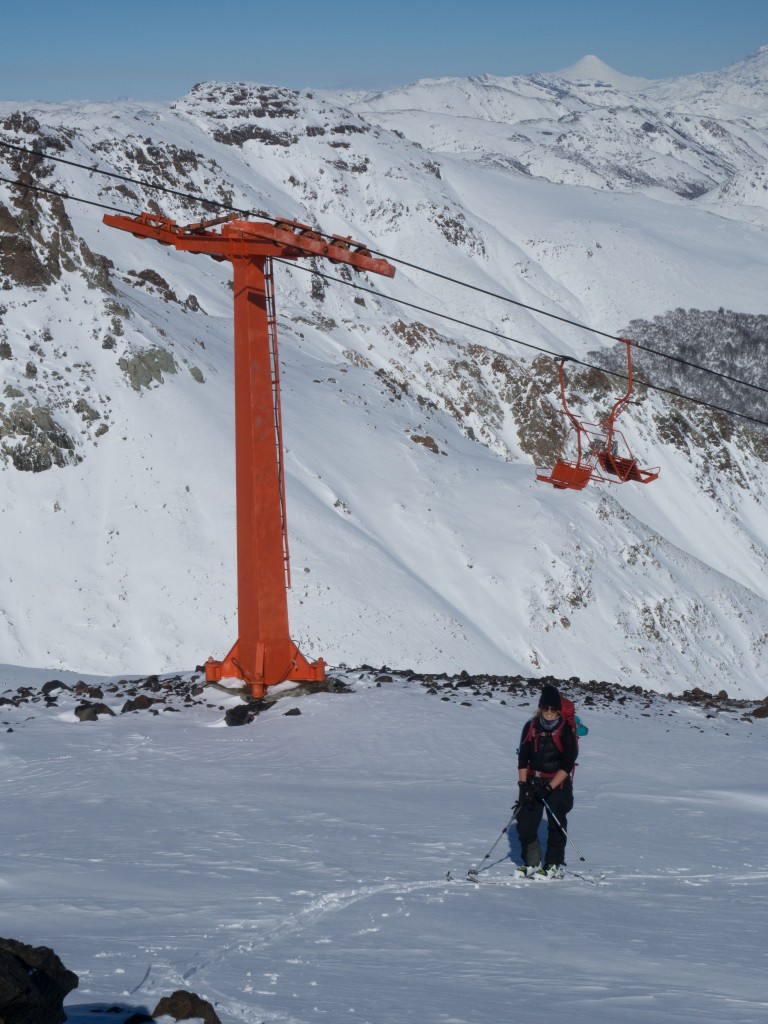 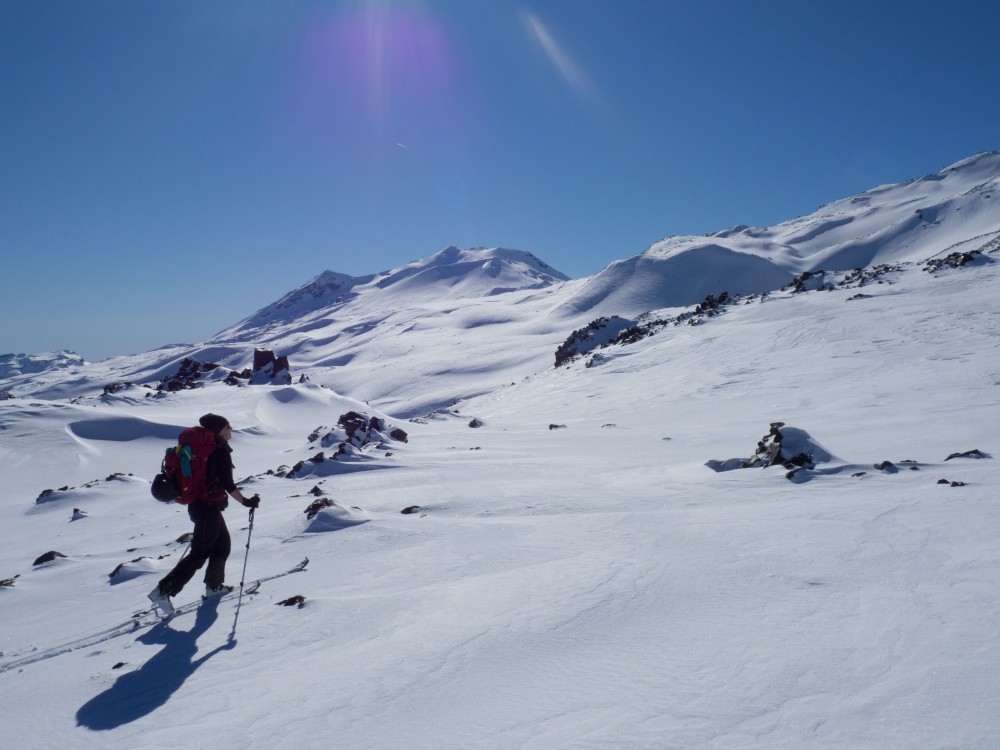 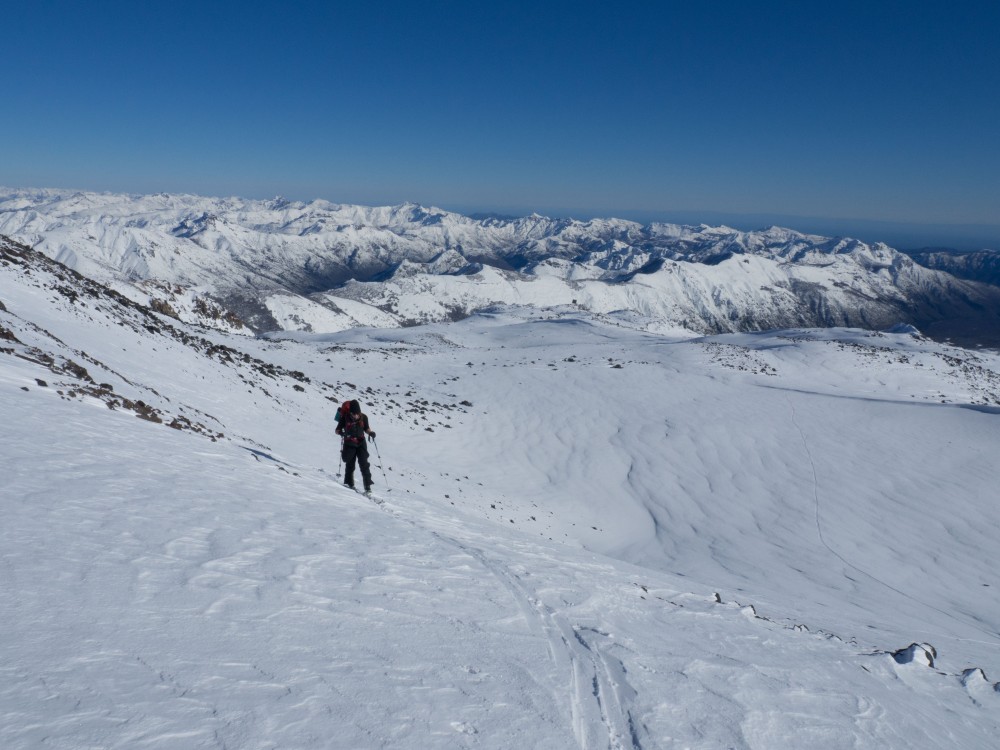 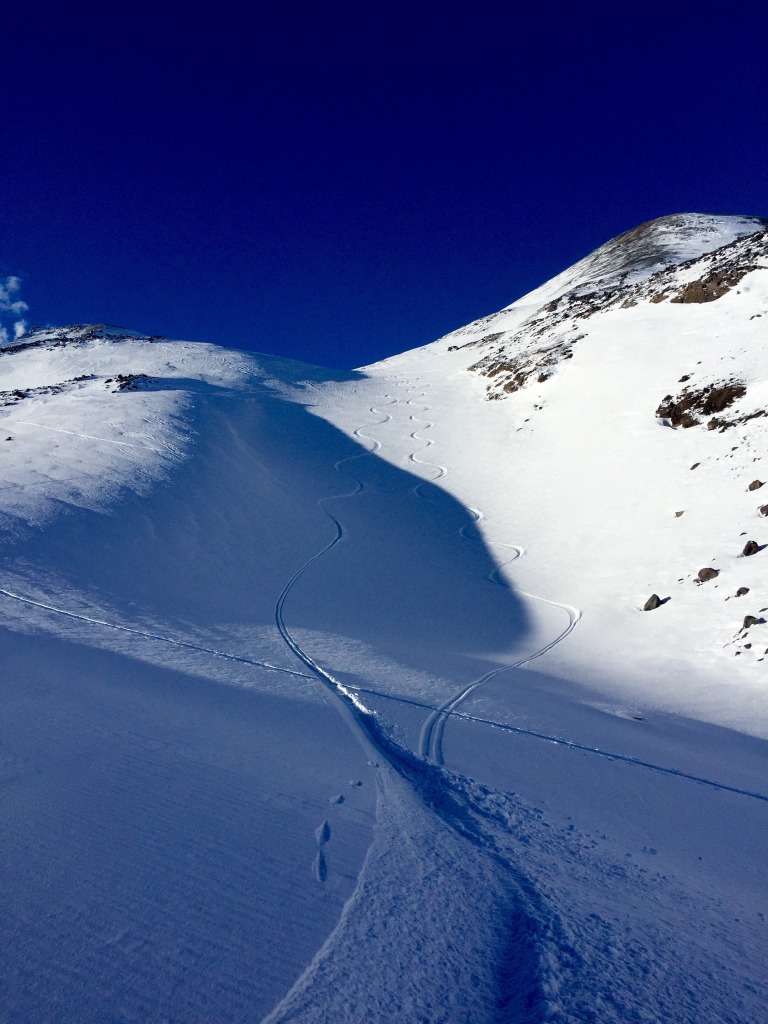 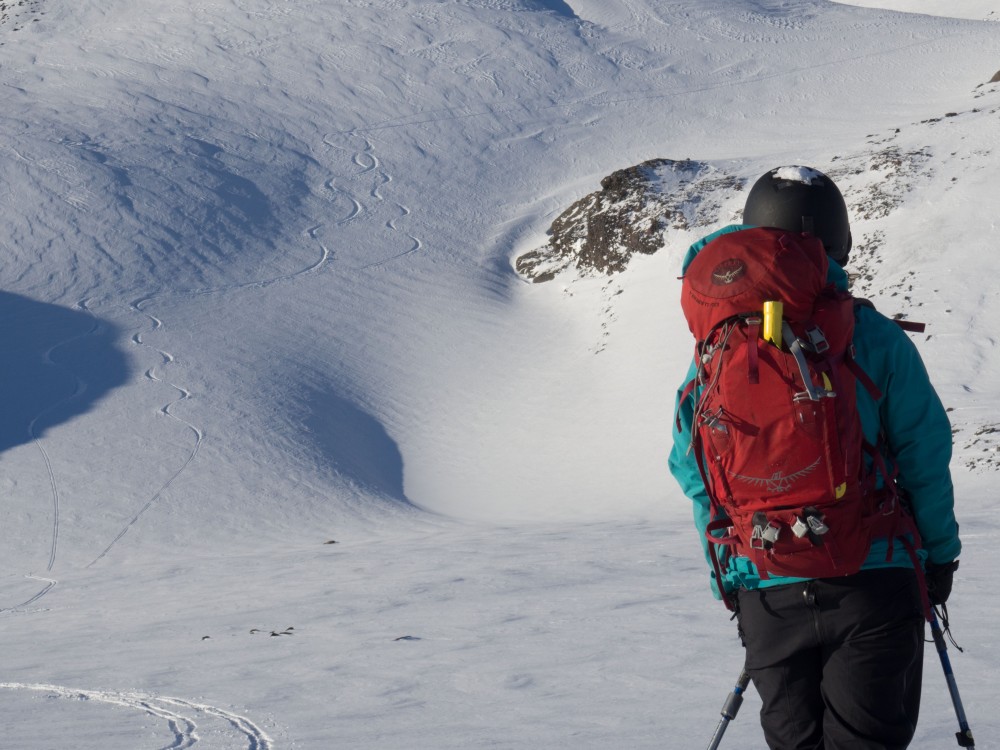