International boarders are imaginary lines drawn by history that really only exist on maps. They criss cross the world generally following geographical features such as mountain chains, rivers, and coast lines but sometimes also just forming straight lines from some point a to point b. Boarders delineate one piece of earth from another in an effort to group together people of a common culture or background perhaps united by language or religion. Separating “us” from “them”. But outside the tiny and abstract realm of quantum mechanics things don’t really exist as discrete parcels. Where one group starts and another ends is blurred and complex, not black and white. One group or another will always be dissatisfied with the current lines which were probably drawn by someone else. So, because no one is going to just give away “their” piece of the earth, wars are fought and new imaginary lines are drawn, and fought over, and redrawn, and so on. Thus leaving our playground world bloodied and battered.

What would a world without borders look like? Free flowing people, goods, ideas, but perhaps also weapons, and terrorists. Anyone could travel to and live anywhere. Perhaps you could work anywhere as well. It’s not a revolutionary idea. Such a system exists on a pretty big scale with the European Union, even as it teeters on collapse. Globally such a system exists as well, in the less tangible but limitless world of the Internet. Perhaps the forces of globalization will move us towards such a society and it’s just a matter of time. Of course this is all an oversimplification. As can be seen in the current state of affairs in the EU, open boarders certainly do not guarantee open minds, and of course global open boarders wouldn’t mean the end of war. However, it would at least mean that I would no longer have to spend countless hours and sacrifice more of my fast dwindling supply of hair crossing through the damn things. Anyone who’s done any international overland travel, particularly through Central America can attest to the fact that they are a time wasting, bureaucratic, and corrupt pain in the ass.

Imaginary lines as they are, there are still some boarder crossings where one experiences an immediate and palpable change in the air. Passing from Mexico into Guatemala is one of these wilder frontiers. Another is crossing from Ecuador to Peru at Tumbes. The coastal landscape changes dramatically from lush green to arid desert which stretches all the way to the Atacama Desert of Chile. In addition to the change of landscape there was also a psychological one for me. Although I usually try to avoid unfounded sensationalization of danger or risk, Northwestern Peru has a very pour reputation for safety. I had heard multiple accounts of armed robberies of other Overlanders in the region over past few months. Just as when I rolled in Guatemala I was a little bit on edge as I crossed the boarder into Peru and headed for Mancora. In Guatemala my concerns turned out to be unfounded as we had nothing but great experiences with the people there. Peru on the other hand would present some issues.

Mancora is the first surf town of significance on the Northern Peruvian coast and the best descriptor I have been able to come up with for the place is the word “hole”. I picked up an Argentinian hitchhiker on the way down who really nailed it when he referred to the place as having “narco ambiente” or a bad drug vibe. During my time there I mostly stayed holed up on the edge of town in the parking lot of the lovely hotel Punta Ballenas. The surf was tiny and the lineup crowded so I took the opportunity to put some serious work in on the blog.

After 3 days the swell had still not picked up so I decided to move on south and check out Lobitos. The drive was an eventful one. As is often the case with google maps, I had elected against following its directions to turn down a few barely there dirt tracks, and finally settled for a larger dirt road. A kilometre in or so I came upon a manned gate marking the entrance to an industrial area. At first the man told me I could not pass, but after some discussion it turned out that I could pass if I wanted to but I wouldn’t have enough clearance and there were many sharp rocks. I was pretty sure I was missing something else he was explaining but I asked him to open the gate. People tell me the camper won’t make it all the time, and they’re pretty much always wrong. The road turned out to be fine and I slowly rolled another 20 kms through oil fields to the town of Lobitos. About halfway in as I was pretty sure I was lost I even reassuringly met some surfers coming the other way in an SUV.

Upon arriving to the outskirts of town I was met with a rude surprise that literally stopped me in my tracks. 200 meters ahead the road was blockaded by rocks and three men in masks stood waving for me to come over. Considering what I had heard about robberies in Peru this seemed like a bad situation. I thought it over though and decided I was probably overreacting and was unlikely to be robbed in the middle of day on the edge of town with people around. So I cracked the window and rolled up to find out what was going on. All I got out of the guy was that the road was closed and I would have to go back. The other two started moving to the back of my vehicle. Probably just to take a look but it made me uncomfortable so I popped it in reverse and put some distance between me and them. At this point I was a little nervous, very confused, and not loving the idea of driving another hour and a half on dirt roads back the way I came. I drove up another road that was also blockaded but was able to walk to the town gate where a much friendlier and mask less man explained that there was a protest being held against the oil company which was not paying to fix the roads as was apparently agreed. That’s why the road was closed. He too said that I would have to go back, but after further discussion he coughed up vague directions to the still open back entrance to town. It took a half hour or so of driving up and down numerous dirt roads and some balls to the wall camper off-roading but eventually I found the back door to the sleepy town of Lobitos.

I found Muelle Surf Camp and parked around back. No one who worked there was around, but a friendly Australian guest gave me the lay of the land. The surf camp itself is an old, airy, warehouse-like building that faces onto the beach with space for tents upstairs and some rooms scattered about. The walls and structural beams were painted with different phrases and slogans and decorated with bottles and shells. I learned that “Lobitos” the wave I had come to surf wasn’t in great shape thanks to the latest storm having shifted sand banks unfavourably. Everyone was surfing Piscinas, a wave just north of it. In the end I got a day in on each wave before heading south to the holy grail of Peruvian Surfing; Chicama, home of “the world’s longest left”. 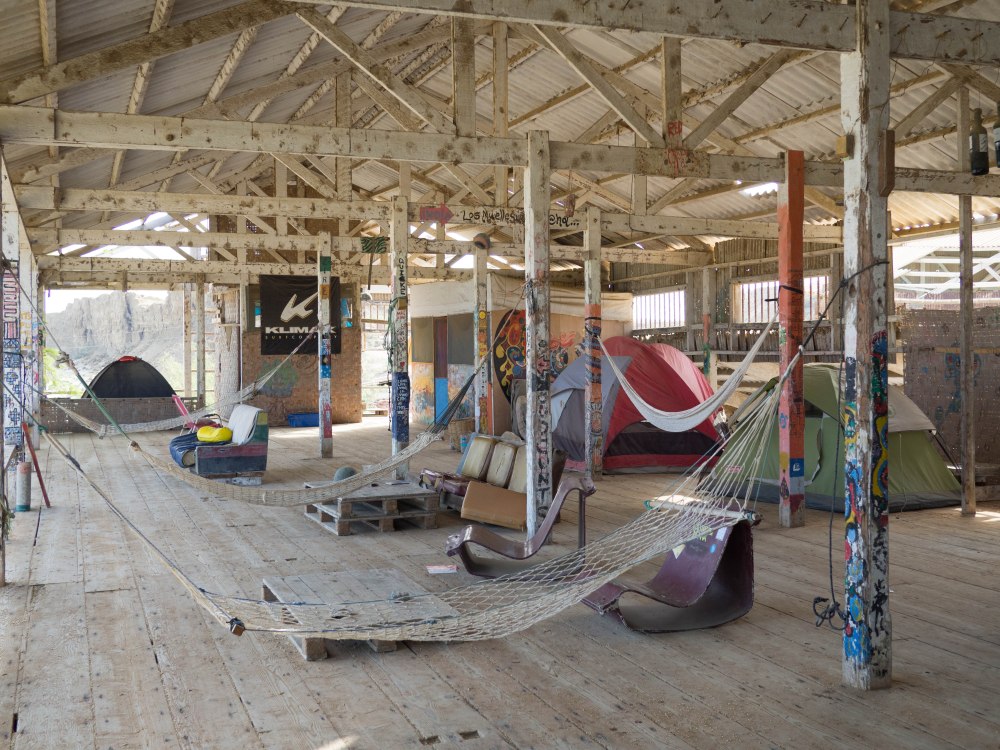 I parked outside of Inti surf camp, where I felt welcome right away. Chicama is laid out such that it’s about a kilometer walk from the beach out to the point. From there you can paddle out and surf all the way back, taking the wave one section at a time. Rides can last for over a minute, which is a very long time. At the first take off on the point the current is strong and requires constant paddling to hold position. There’s always a crowd here and generally whoever is the most aggressive and doesn’t stop paddling gets the waves. Because of the current, it’s usually easier to surf the wave all the way in to the beach and walk back around than to paddle back out. The beauty of Chicama is that the wave is so long that there are 4 more places to takeoff farther down from the point. When it’s busy it’s usually still possible to find your own space. Even when a group of 15 beginner paddle boarders from Israel has chosen Chicama as their vacation destination at the same time as you. As a bit of background, stand-up paddle boarders are considered to be the bane of all existence by some surfers as they are able to catch waves farther out and get most of the rides. Beginners are probably even worse, because nobody wants to be in the path of an off balance, out of control man on a 12 ft. board holding a paddle and screaming. To cut the crowds even more one can walk 15 minutes past the point to “The Cape” which is also a great wave and when it’s big it can be almost as long as the point.

Perhaps the most controversial topic at Chicama though, is that of the small boats that surfers hire to shuttle them on the wave. Budget conscious and purist surfers can often be heard sneering about getting snaked by a boatload of surfers with fresh arms dropped at the point in prime position for the next set. I certainly see it their way, but not so strongly that I wasn’t compelled to try it. If you can’t beat em, join em. The boat costs about 20CAD and shuttles you for 3 hours. During my 3 hours I must have caught 30 waves, sometimes leaping off the boat and paddling straight into the next wave. It was one of the best sessions of my life, but I didn’t hire the boat again. It feels better to earn your turns, to borrow a figure of speech from backcountry skiing. 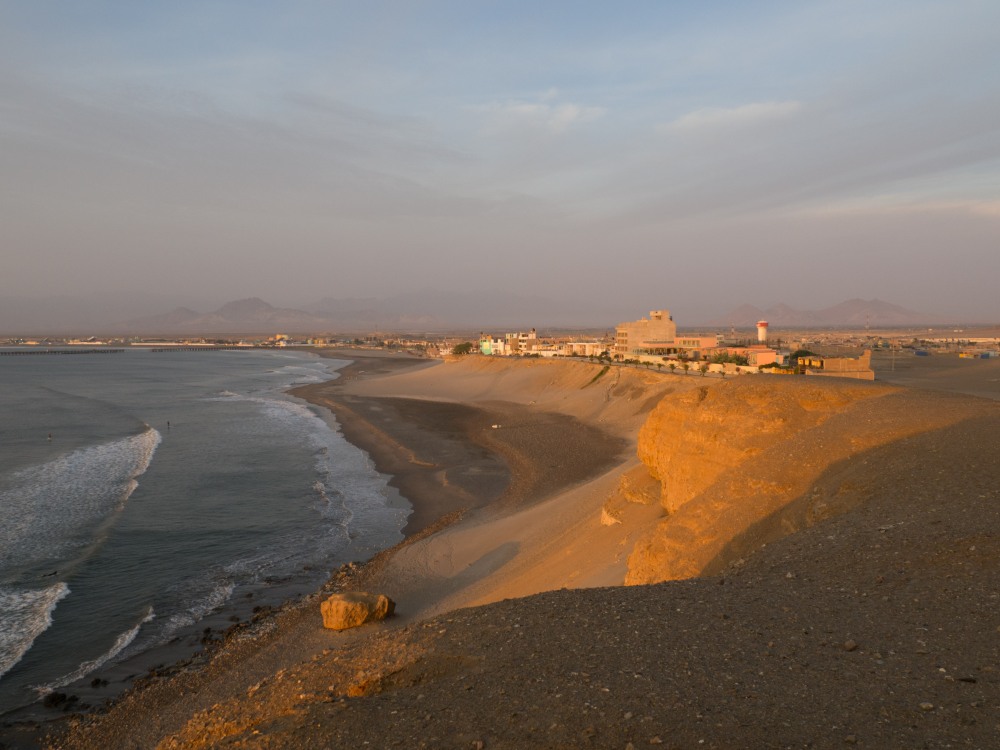 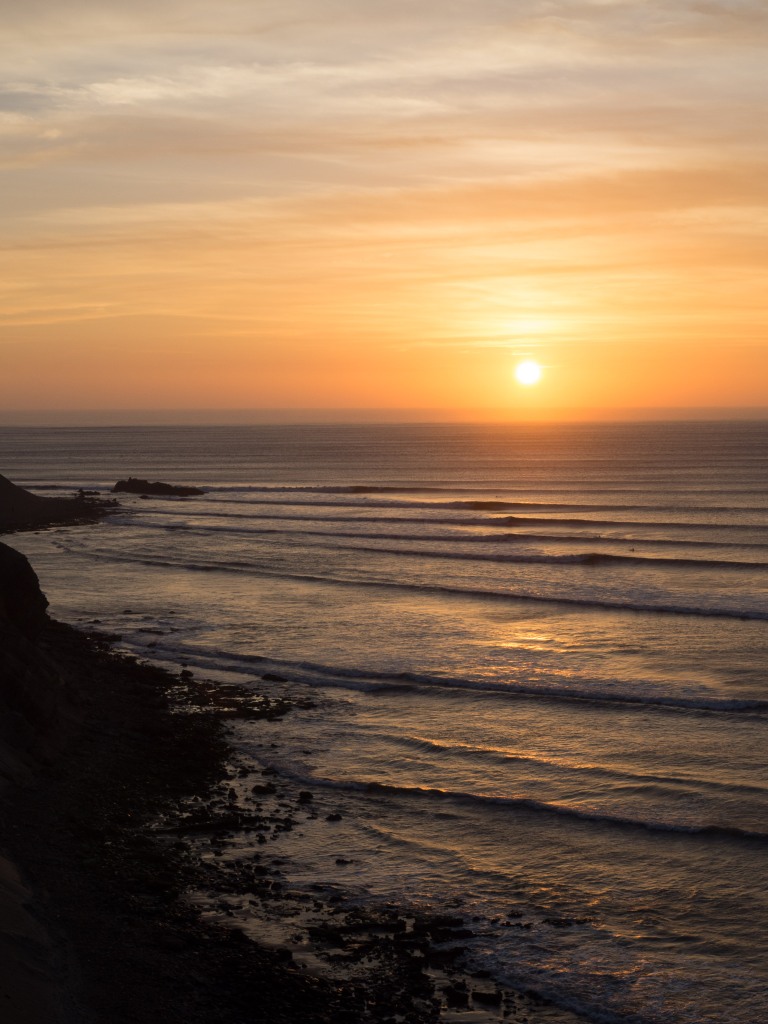