Volcan Chimborazo was a big question mark in the Ecuador leg of my journey. I was travelling solo at the time, and didn’t have a partner to do the climb. Additionally local laws required alpinists to ascend with a guide. After checking around Banos I was quoted prices ranging from 350 to 450 USD. This was prohibitively expensive. I decided to see if I could coax the camper up to the Cerro Refugio on the mountain and investigate the options there. Perhaps I could join up with another group and find a better price there.

The drive from Latacunga is beautiful and the road climbs gradually. It’s an excellent place to set elevation records for any vehicle. I made it to the Chimborazo National Park entrance without issues, but after crawling through the park gate with the pedal to the floor I had my doubts about making it all the way. From here it was another 8 km along a winding dirt road climbing another 300 meters to the refugio. The park ranger assured me that any vehicle could make the road so it was worth a shot anyway. With the pedal once again to the floor I started winding my way up the wash-boarded dirt road. For much of the climb I towed the line, on the edge of stalling with the speedo needle barely above zero. But The Little Camper That Could determinedly kept on rolling. “I think I can, I think I can.” With a triumphant fist pump we rolled into the refugio parking lot, pedal still floored, at an underwhelming 5 km/h. But it didn’t matter; we had made it to the impressive height of 4800m above sea level. Success! Above me the slopes of the impressive Volcan Chimorazo rose another 1400 meters. It’s Equador’s tallest mountain, and the farthest point from earth’s center thanks to earth’s equatorial bulge. El techo del mundo (The roof of the world).

Now that I had made it the refugio the first order of business was to find out if I could hire a guide there. In the small restaurant inside I had a coca tea and a pastry while I waited to talk to the owner of the hut. He was a charismatic Ecuadorian gentleman named John who had lived much of his life in Toronto. Dealing directly with John at the hut I was able to get a better price than in Banos. It was still expensive, but I had made it this far and I wasn’t about to back down with the mountain at my literal doorstep. I arranged to climb 4 days later allowing for plenty of time for acclimatization. I had spent most of the last week sleeping above 3000 meters at Cotopaxi National Park and at Quilotoa, so I was already fairly well acclimatized. Nonetheless I wanted to give myself the best possible chance at summiting my first 6000 meter peak. It was hard to imagine a more beautiful place to kill a few days. I spotted some interesting wildlife, including a close encounter with the Andean wolf. 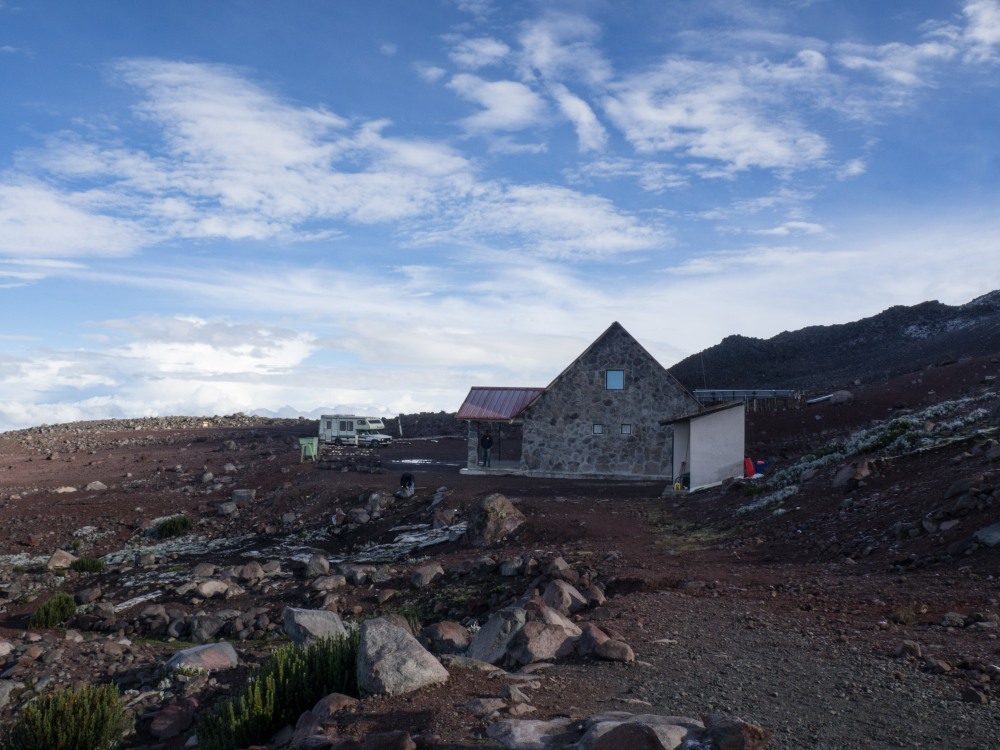 At the refugio I met some great people, including a couple named Aaron and Carline of New Zealand and Canada who happened to live some blocks away from my place in Vancouver. We were scheduled to summit on the same day, so we acclimatized together and killed time talking about playing Settlers of Catan. Sadly we only ever managed to get through half a game the night before the summit push, as it was time to squeeze in a short nap before departing at the ungodly our of 11pm.

High elevation alpine starts are amongst the most unpleasant experiences that a person can subject themselves to. Generally speaking, they behoove one to wake up in the middle of the night after getting little to no sleep thanks to the elevation, try to eat something, gear up, and set out into the night travelling by head light. Climbing in the cold dark is certainly physical challenge, but I think it’s a greater mental one. Feeling the effects of the altitude as you climb higher can be the hardest part as you are constantly assessing how you feel against the symptoms of HACE and HAPE. Luckily for me, it appears that I have been blessed with a very short memory. In the darkness I always struggle against the desire to return to the comfort below, but when the sun’s light comes I always feel renewed and energized. So far I’m still coming back for more.

Although not technically difficult, Chimborazo is a true slog. From the lower refuge at 4800m most partiers ascend in a single 1400m summit push. The guides I spoke with admitted that they don’t like doing it, preferring other climbs in the area like the currently closed Cotopaxi.

All too soon it was time to go. We were a large group of clients and guides and left for the summit together. We took the faster direct route, which had recently become passable do  to snowfall and freezing stabilizing the loose rock in the previous days.

The first few hours of climbing passed quickly as we scrambled our way up scree, donning crampons for better grip on the increasingly snowy rocks. After the scree section we topped out on the west ridge of the mountain around 1 am. Here we took a break and roped up in preparation for the glacier above. At this point I was cold, but feeling pretty strong. 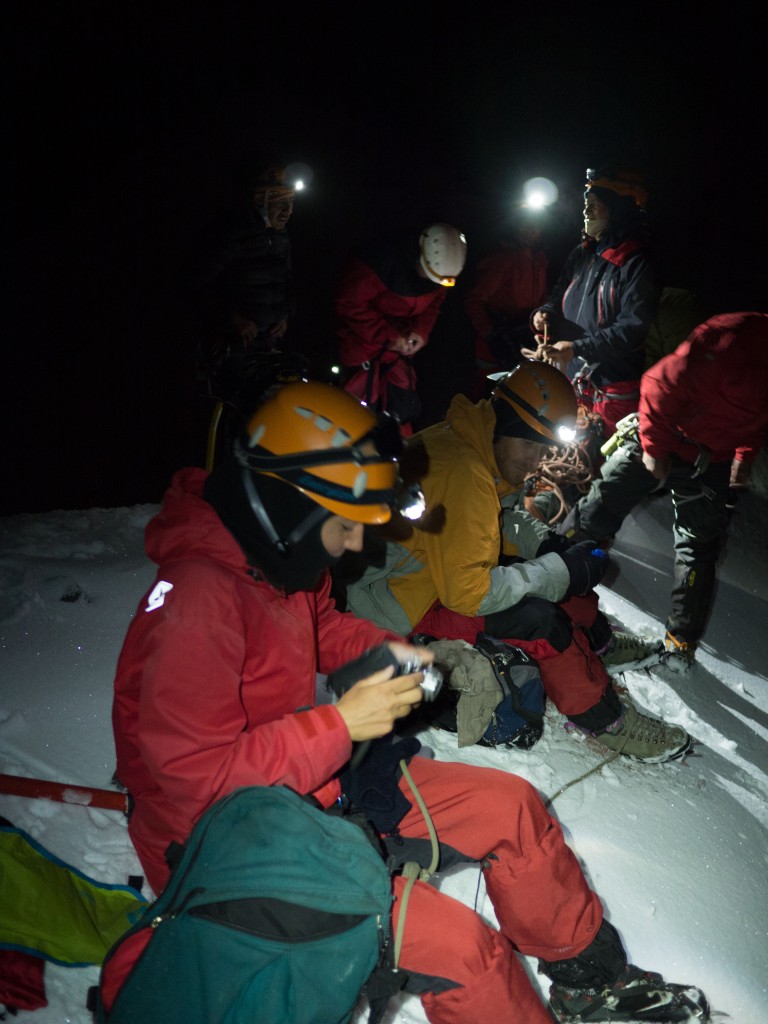 Ascending from here there is a short steep rocky section to be negotiated. After that it’s the seemingly endless snowy slog to the summit. Travel was variable, with good firm snow on the glacier, but also a great deal of breakable wind crust. Off the glacier punching through would occasionally mean sinking in to the waist as your leg fell into cracks between the rocks below.

Above 5900m I started to feel the altitude, and after 5 hours of climbing in the dark I was starting to fatigue both physically mentally. Above 6000m if I punched through the effort of extricating my leg and making the next step left me breathing hard for minutes. Although mild, I could feel the symptoms of altitude creeping in as a headache was slowly taking hold. I found myself coming up with all sorts of reasons to turn around. It was still completely dark. We moved slow and took frequent breaks, allowing me to catch my breath, but also making me very cold.

Climbing the last 200 meters to the summit was the hardest thing I have ever done. I had to dig deep for each step, and I felt ill, cold, and weak. It seemed like it took an eternity, but eventually the dawn came and we reached the bizarre ice formations that crown Volcan Chimborazo. Over head high, they formed trenches that we ascended to the Ventimilla summit at 6217m. There we waited 30 cold minutes before being rewarded by a beautiful sunrise. The true summit is 100 meters higher and seemed a stone’s through away, but thanks to the field of those bizarre ice pillars and trenches it would have taken 2-3 hours to get there. There was no discussion of going on. I think everyone, myself included, was very satisfied with the Ventimilla Summit.

Of the group that started everyone but one person made it to the top, including Aaron and Carlene. An excellent effort by all as, according to guiding company, the success rate on Chimborazo is about 30%. I think Aaron dug deeper than anyone, at times zombielike in his determination to summit. He had not been able to sleep for days before the climb.

We spent an hour on the summit, which was too long in my opinion. Feeling nausea building and a worsening headache I started pushing the guides to go down. Memories of my tough decent off of Pico de Orizaba with altitude sickness were making me a bit concerned. The guides were in the midst of a photo shoot for some promotion the lodge was doing. But they quickly packed up and we began the long walk back down to the hut. 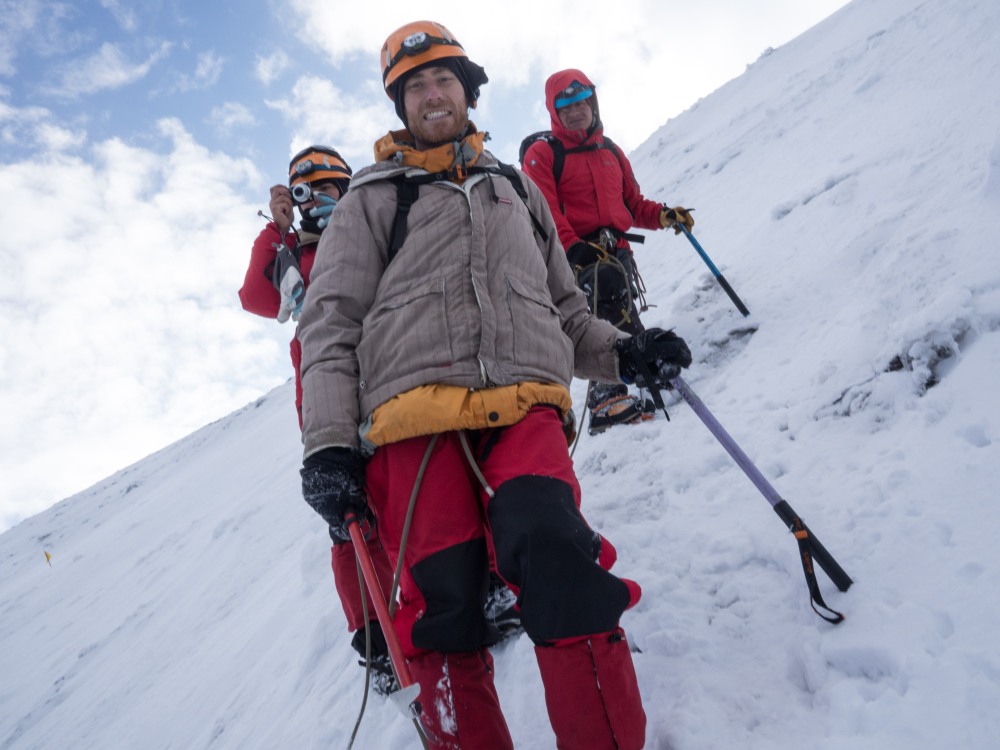 By the time I got to the hut hours later my feet were screaming in my ski touring boots that I had worn for the climb. I napped for a few hours before I started the camper and set controls for the coast of Peru, my first peak over 6000 meters in the bag.