Despite having spent a large portion of our Panamerican trip behind the wheel, the core purpose of the trip was never to drive spectacular roads. It was more about the things to do along the way. The Ruta de Las Lagunas was an exception. It is one of the famous over landing routes of the Americas. The journey is a little less than 500 km, mostly on dirt roads, starting in Uyuni, Bolivia and ending in San Pedro de Atacama, Chile. It is reputed to be one of the most scenic drives in the world and a lot of people will tell you not to try it without 4wd. Naturally I was a little concerned about embarking on a long excursion into remote 4×4 territory in my underpowered RWD motorhome. I did a little research and discovered that a guy had done it on a scooter. This was encouraging. I got some first hand information from my buddy Caju who had recently completed the route himself. He reported that the road got pretty bad, but the camper could definitely make it. He rated it as one of the most beautiful drives of the trip. Darren and I talked it over and decided to go for it.

First order of business was to stock up on supplies in Uyuni. We bought food and water for 4 days, which we figured would be enough to make it to San Pedro with a little extra for emergencies. Next we found an extra jerry can. It’s about 400km between gas stations on the route, and that’s if they have any in Alota. If not it’s closer to 500km. We carried 40L of extra gas, on top of the 65L in the tank.

There are a few ways to complete the route. I was told that the west road that follows closer to the border is very bad. My friend Caju was warned not to go there in his Nissan Pathfinder. Instead he recommended that we take the east road, which heads straight south from the town of Alota. From there we planned to continue south for about 130km before cutting west and crossing a 4800m pass, dropping us down to Laguna Colorado. After that we could have to head to Bolivian Customs, inexplicably located completely out of the way at a sulphuric acid plant at 5033m.

Topped up on gas, food, and water we set off. The road from Uyuni to Alota was surprisingly good and we managed an average of 60 km/h on this section. Heading south from Alota was another story. The road quickly grew sandy and washboarded. Our average speed probably dropped to 10-15km/h. Soon a vast rock garden came into view to the west. The climbing potential is literally unlimited, and almost none of it is developed except for a small section on the north end. About an hour south of Alota we spotted a cool looking natural rock amphitheater on the west side of the road. We couldn’t resist the opportunity to get up close and personal with the rock garden and so decided to stop there for lunch. The rock formations in the area were some of the coolest I’ve ever seen. We spent an hour or so walking around finding cool bouldering problems. In the meantime a steady flow of tour groups in land cruisers cycled through, taking 10-15 minutes for a quick walk around and then heading on to the next attraction. We both agreed it would be sad to have to leave this place so quickly. 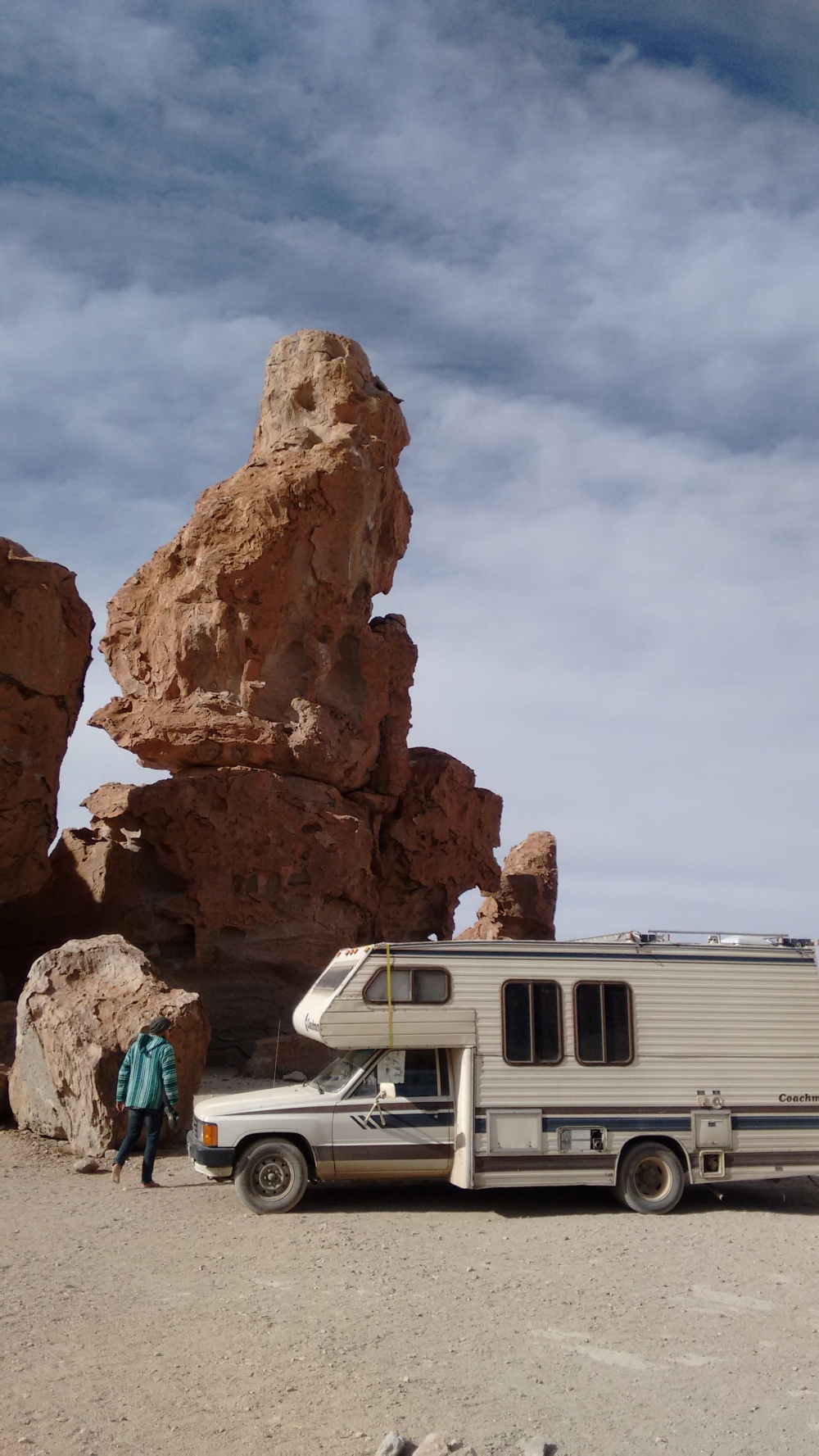 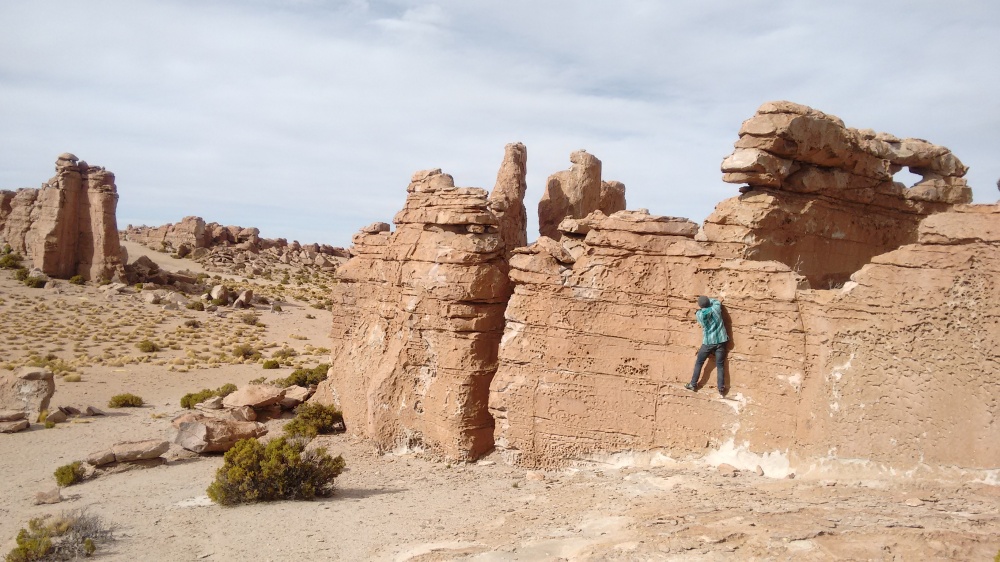 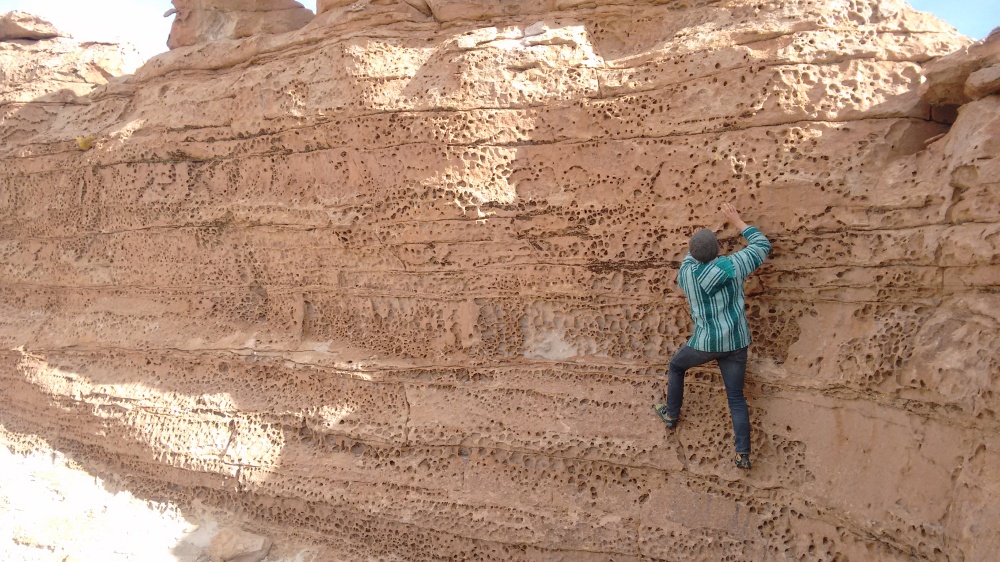 Eventually we felt satisfied and set our sites on a campsite down the road that was also supposed to be amongst the rock formations. The side road to get there had the worst washboard I have ever driven on, but it was worth it. We found another surreal rock amphitheater to park the camper in for the cold starry night.

In the morning I looked out the window and was startled to see a girl wandering by and ogling camper. This place had felt so remote, which it was, but it was also on the landcruiser tour route. Darren wandered off with the aim of walking on top of one of the many rock formations and setting up a top rope for a longer climb. He managed to find an absolutely stellar crack that we spent the morning playing on until we were so pumped out we couldn’t climb anymore. 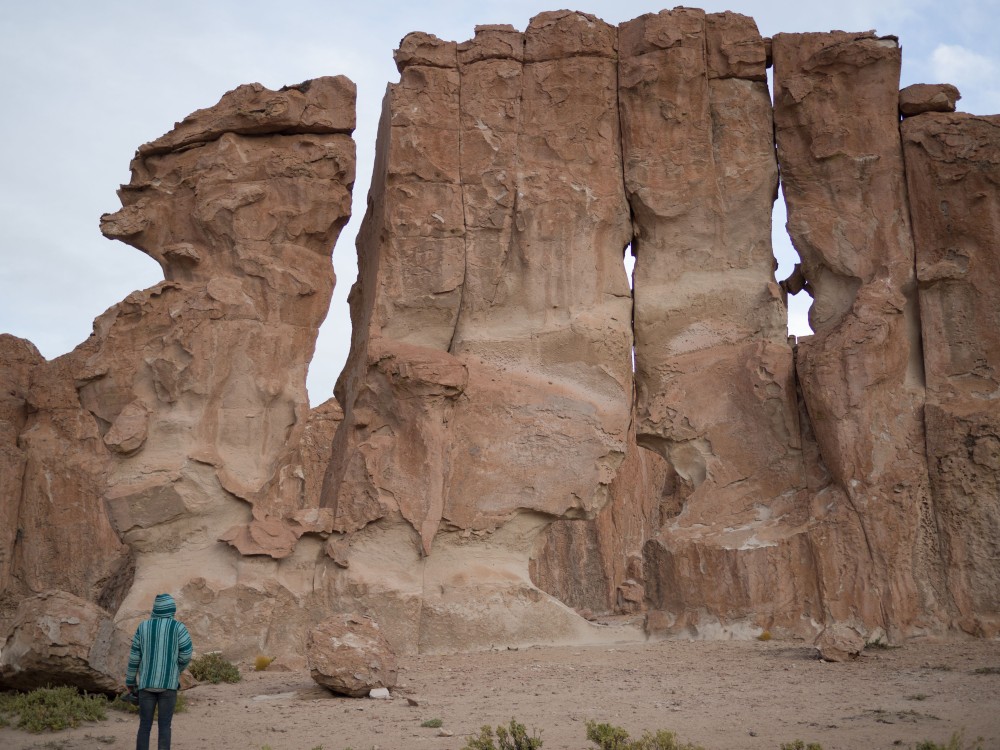 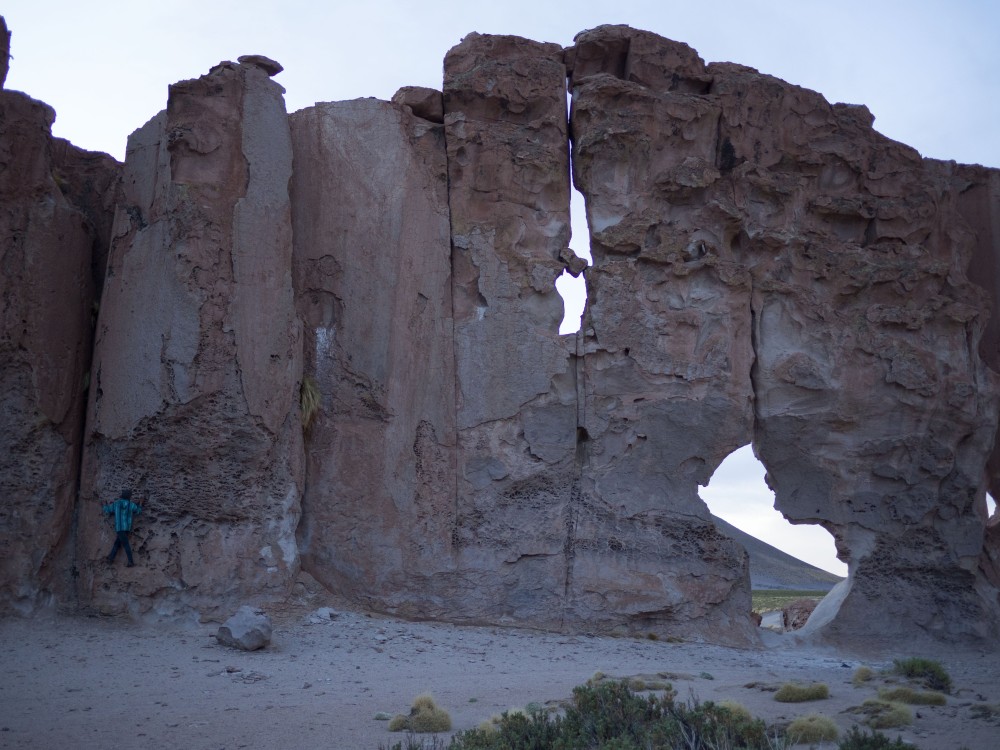 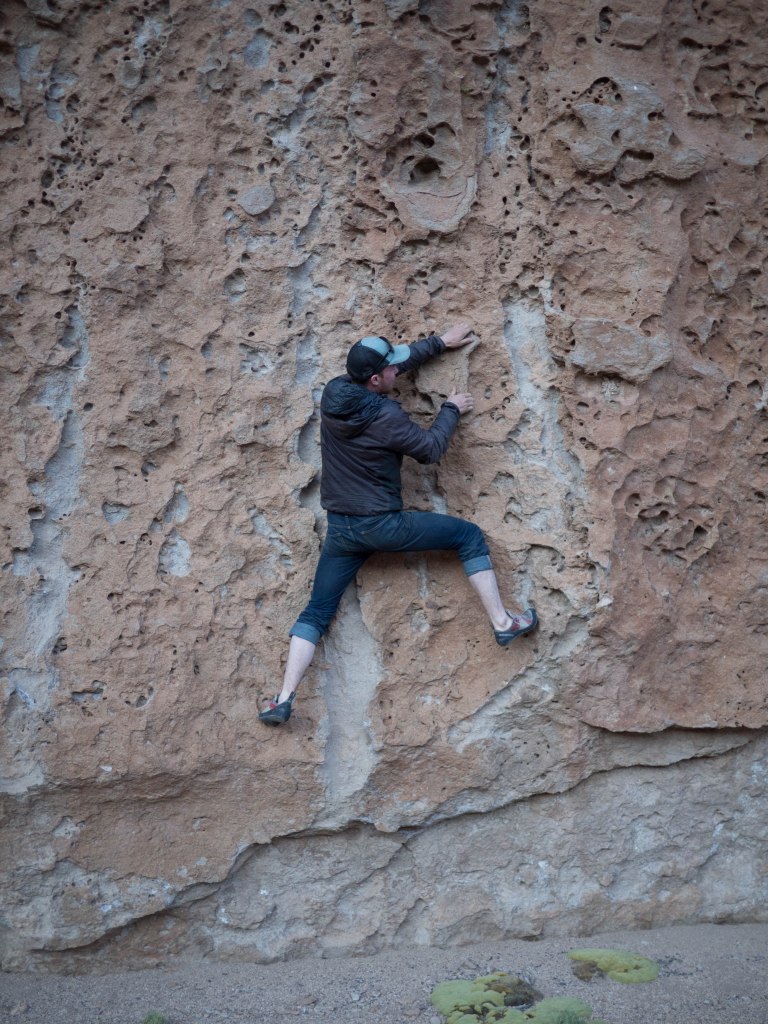 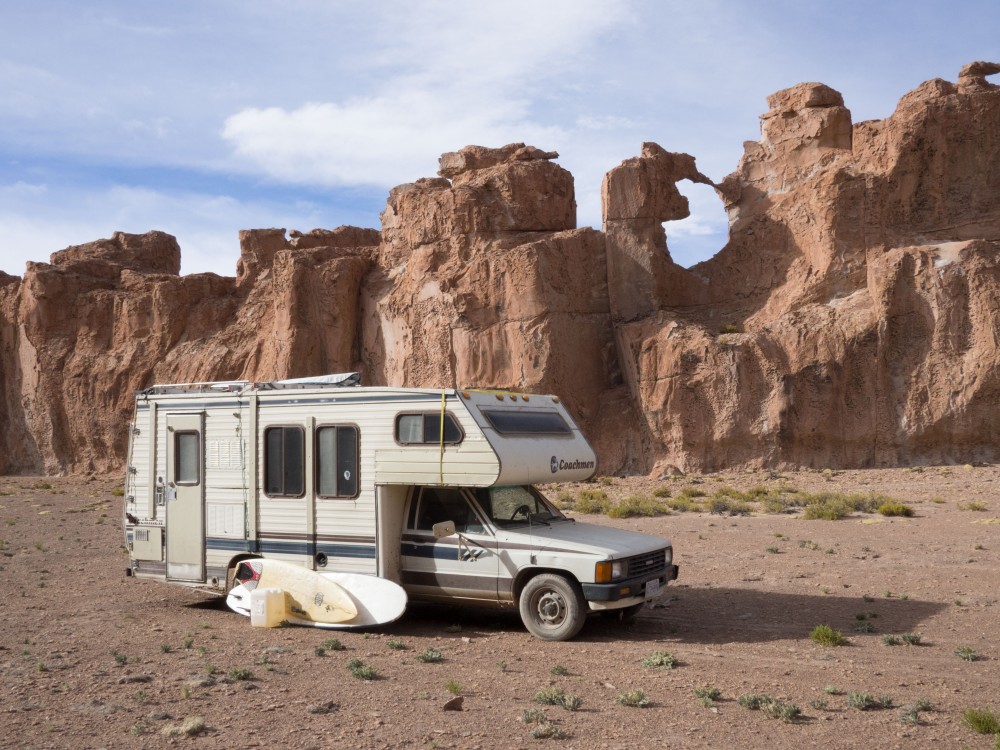 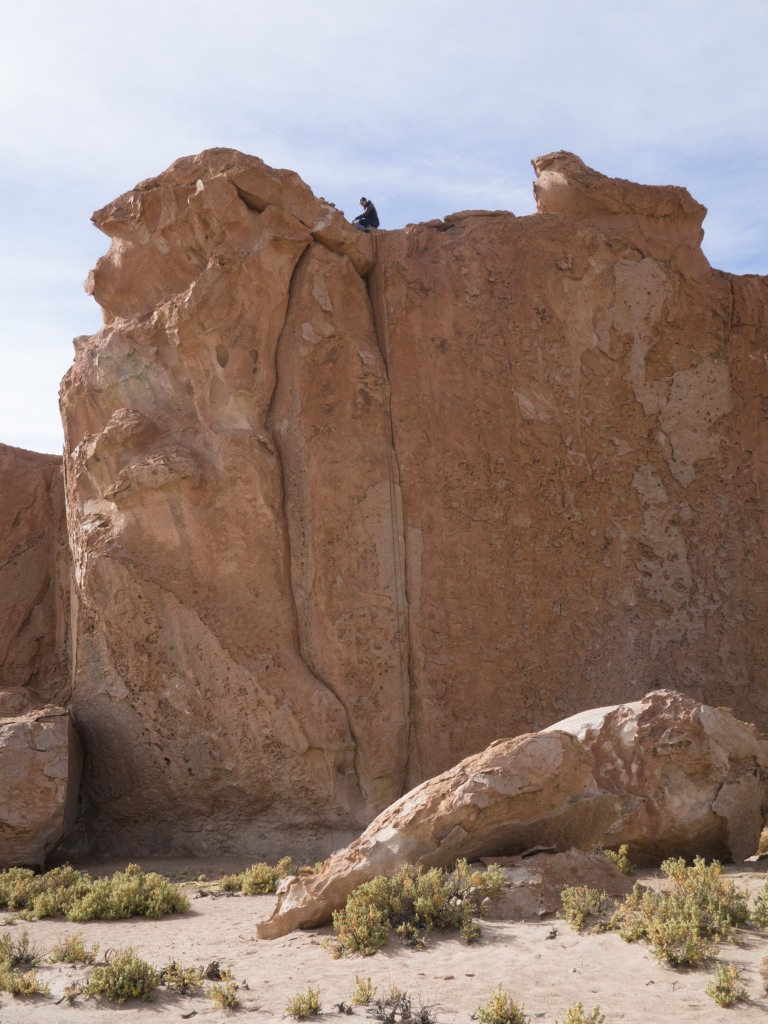 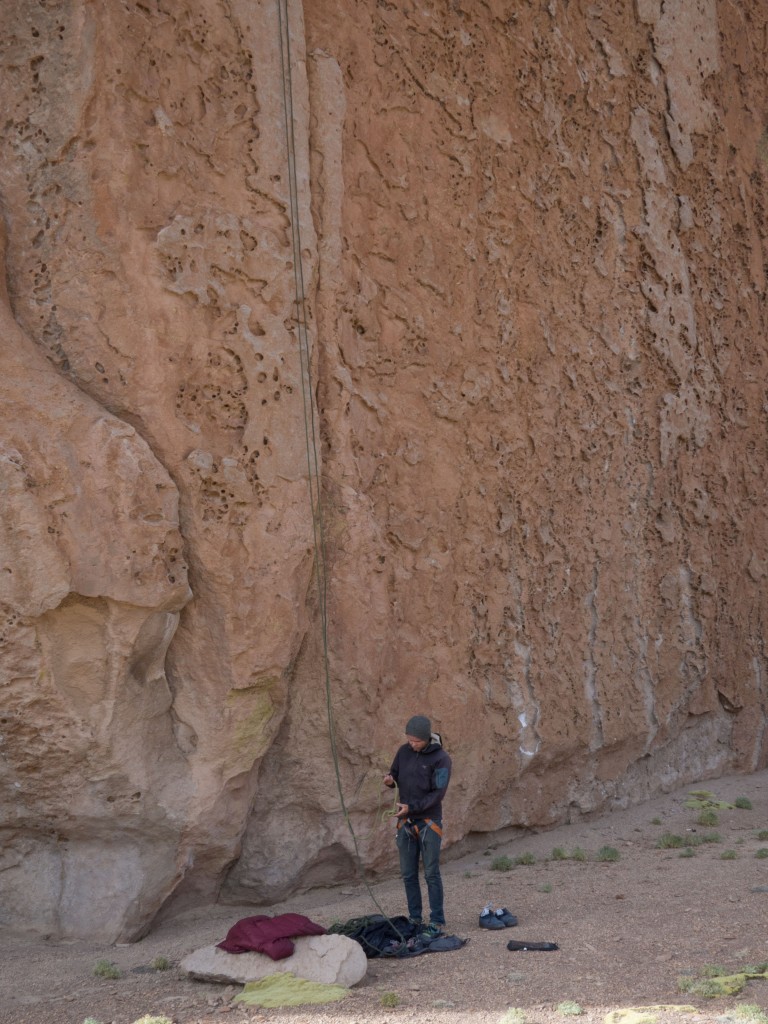 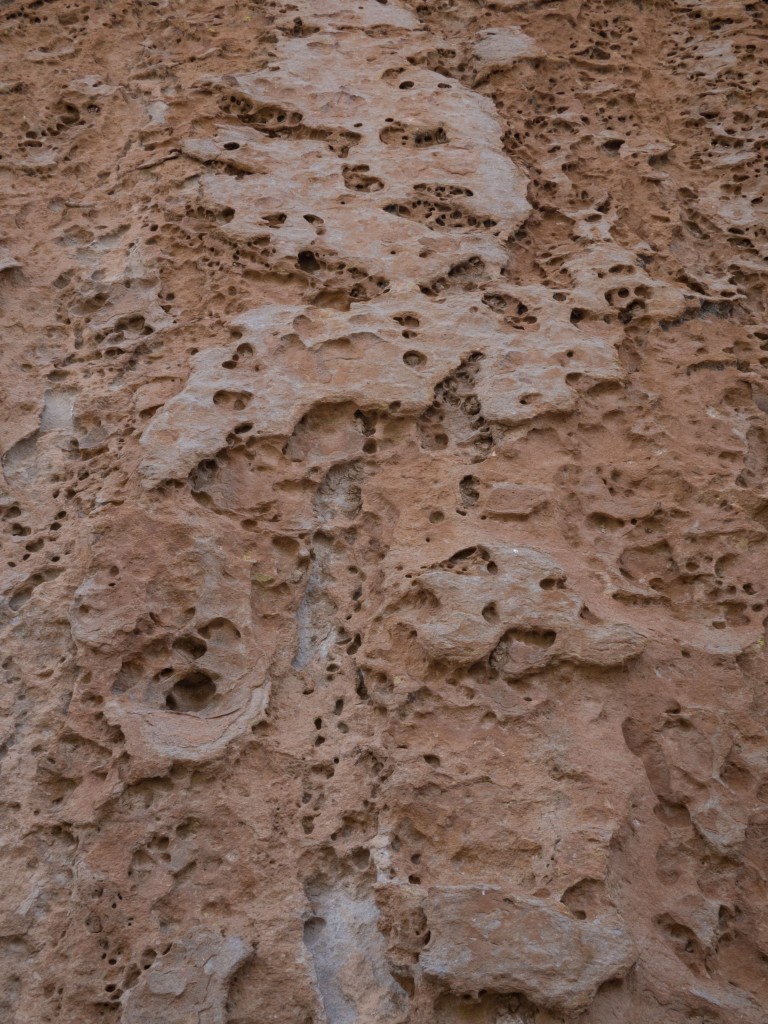 We negotiated some more heinous washboard to get back on the slightly better main dirt road and kept heading south. In the distance a small road came into view, snaking it’s way up into the mountains. I remember thinking that it was a good thing we weren’t going that way, as it looked really steep. As we approached it became clear that I was completely wrong, and that was in fact the route over the high pass to Laguna Colorado. We could either over it or around it. Around it was double the distance, so we elected to go over. The camper did amazingly well, negotiating snow, river crossings, and rough road, but as we gained elevation the oxygen starved engine lost more and more power. Eventually we came to a hill that was just too steep, and we could go no further. Darren even made a few heroic attempts at pushing. We decided to wait and see if we could flag down a truck to tow us up. The first group declined to stop for us at all. The next guy wasn’t overly friendly and wanted 80CAD to do it. We waived him on, for that price we’ll drive around thanks. After over an hour we were about to through in the towel when a French Canadian filmmaker came by. It turned out he was more than happy to do it, but he suggested we go around as the road was very bad ahead. Not about to turn back now we asked for the tow and got the extra oomph we needed to gain the pass. Hurrah! 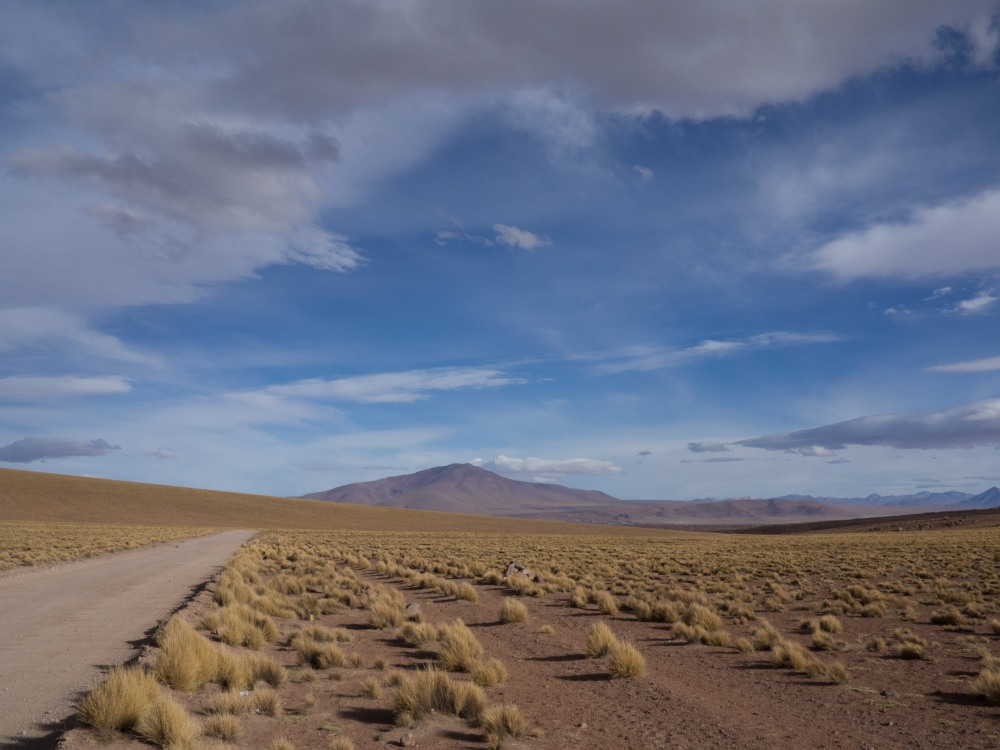 Over the other side the road did get very bad, but we took it slow and made it down. The landscape became increasingly moonlike and we got our first look at one of the area’s desolate lithium lakes. On the route there are constantly little side tracks branching off the main road, often temptingly devoid of washboard. The problem with the side tracks is that they tend to have a mind of their own, and a few times we found ourselves winding farther and farther away from the main road. They also tend to have very deep tire tracks, nearly bottoming out the camper on a few occasions. After one particularly exciting nighttime adventure when the undercarriage literally ploughed through deep sand at full gas to avoid getting stuck I decided it was probably best to ignore the siren song of the tempting smooth looking side tracks. Thankfully the camper floats remarkably well in sand thanks to its double back tires. The main road had it’s own deep sandy sections and I gunned it through to keep momentum. Happily we never got stuck. Eventually I got my fill of night driving in sand. We pulled over and spent another sub-zero night on the side of the road next to Laguna Colorado. 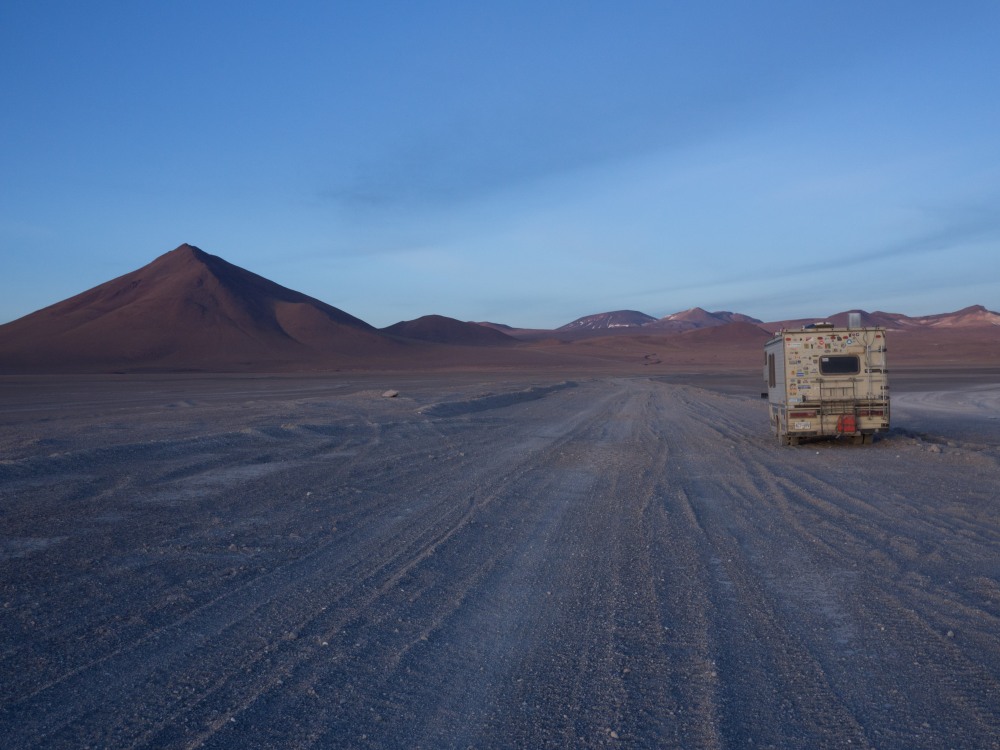 The next morning the camper was a little stubborn getting started, but eventually came to life like it always has. We made it a few minutes down the road before noticing the smell of burning plastic. I pulled over and checked on the engine, this would be a bad place to brake down. Everything seemed fine so I returned to the cab where I noticed smoke wafting up from the back of the camper. It turned out that the house battery had somehow shorted out causing a small fire in the battery compartment and melting some of the house wiring. We were lucky that the fire stayed contained, but the house electrical system was unfortunately toast.

There wasn’t much to do about it there so we trucked on, but it weighed on me a bit. Motorhome electrical problems can be very tricky to fix with limited access and, in my case, no circuit diagrams to speak of.

The remainder of the trip was less eventful. We cruised through moonlike highlands and coaxed the camper up to a record setting 5033m at Bolivian customs. Next we took a rejuvenating dip at the excellent natural hot springs. I relaxed in the pool and couldn’t help but overhear a group of girls from the U.S. discussing how they were possibly going to make it through their 3-day 4×4 tour without showering. It left me feeling a bit like I was from a different world. It dawned on me how different my way of living was to that of most of those lucky enough to live in developed countries where most people take hot showers once, or maybe twice a day. Showering on consecutive days is a rare pleasure indeed in the camper life.

Where I wake up is usually not the same place that I go to sleep. Movement is my norm and staying still is sometimes a luxury. It may be the freest time of my life. I have no job to go back to on Monday, and no social engagements or obligations to rush to afterwards. What I have is the open road and a camper packed full of surfboards, climbing gear, and ski gear with which to drive on it. For that I am truly grateful. It has been and continues to be an incredible experience. That said; if I told you I didn’t miss my old life, complete with job, deadlines, and social commitments I’d be lying. It’s going to be amazing to return to my community of friends and loved ones (many one and the same) in Canada. But for now, I still have road left to drive.

The last attractions on the Ruta de Las Lagunas were the beautiful lagunas Verde and Blanca. Exiting at Bolivian immigration was a breeze and before we knew it we were rolling on a full-blown first world quality highway. After 3 days of jarring dirt and washboard it was pure bliss to cruise the smooth pavement into San Pedro de Atacama, Chile.