The list of places every Canadian should visit is sometimes plagued with many unfortunate clichés, like the Big Nickel in Sudbury I was forced to “experience” for 2 hours in -20 weather as a child. The Rocky Mountains are nowhere near this kind of experience. Once stepping foot into the mountains it’s very difficult to think of Canada as anything other then breathtakingly beautiful. I’m a little ashamed that this was my first visit given how long I’ve lived on the west coast. Luckily for me, my hosts for the week were the Renborgs, seasoned experts in these beautiful national parks.

We came to the mountains to celebrate Thomas’s grandparents 60th wedding anniversary, with his entire extended Swedish family. One of the great benefits of a trip with the Renborgs is you are quite likely to see some exceptional naturally beautiful views. This trip was no exception.

The first hike we went on was exactly what I was in the mood for after our adventures in Alaska. The 8.0 km hike began on a smooth well marked trail that turned into a slightly rockier, but still well defined path. After a couple glimpses of the Sulphur Ridge to our right the trail finished off with an steep hike to the top of the ridge. Once on the top we had an unimpeded 360 degree view of the Sulfur skyline, a pretty fantastic view for relatively little work.

The next hike we did was an 8.2km loop overlooking Maligne Lake called Opal Hills. It was a criss-crossing hike through tall evergreen trees that opened up to a valley of wildflowers and wildlife. After a Scandinavian lunch of real Swedish berries (brought all the way from Sweden by Annika), sandwiches and tasty cheese we headed up a steep hill to a magnificent view of Maligne Lake.

When Mary Schäffer first discovered this lake over 100 years ago she described it saying, “There burst upon us that which, all in our little company agreed, was the finest view any of us had ever beheld in the Rockies!”. The lake was a bright aqua color I’d never seen before in Canada hugged on each side by enormous mountains with snowy peaks. Looking at the contrast of the glacier-fed lake to the green around it I would certainly agree with Mary’s exclamation.

What I felt was especially impressive about this hike is the entire Renborg family (aside from the grandparents) did this 8.2 km loop. This included both of Thomas’s Aunts Stina and Annika, his uncle Rick, his cousins: Ian, Tom, Danny and Lib, his parents Anders & Unni and his brother Lars. Everyone was led up and down the hike by the cheery and encouraging Anders. Aside from the beautiful view, the hike was full of smiles and jokes from Tom, a breakdown of the many Mario & Luigi plot theories from Danny and a good grizzly bear story from Anders. With the views and constant entertainment before I knew it we were down to the bottom again. After a little ice cream on Maligne Lake we headed to Annette Lake for a dip.

Growing up in a somewhat larger family of 7, the hustle, bustle and commotion of being around a big family was a familiar and comforting environment for me.  Having my own family far off in Ontario, I felt very lucky to be welcomed into their family time for a week of Scandinavian waffles, thoughtful chats, warm hugs and Swedish lessons.

Heading back through the Rockies to Calgary we decided to stop for one last hike, Wilcox Pass. We got into the parking lot and managed to find one last spot (it was completely packed for the long weekend). The hike started out on a well maintained track up a steeper section until we got to the first view point and sat down on one of the Rockies famous red chairs. After this, the crowd continually thinned out until after crossing down through a gully and back up on to higher ground again, we came back to a fantastic view of the Columbia Icefield and where we were free to admire it without anyone else around. 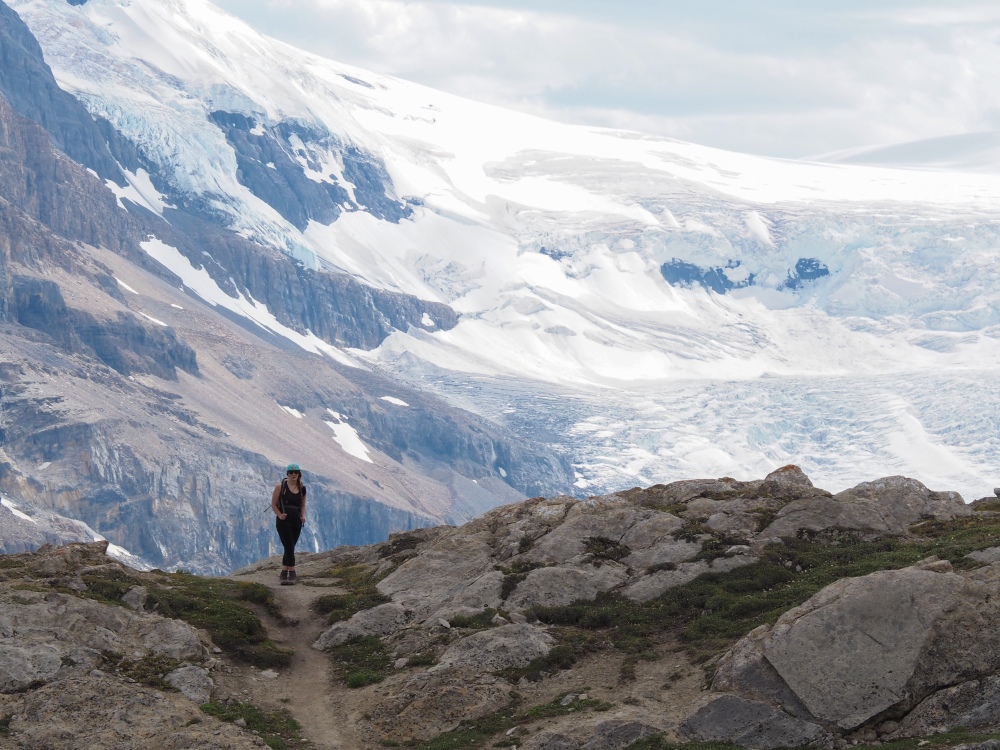 After heading back down we found a beautiful (and somewhat against the rules) spot to sleep on Bow Lake. I have a feeling this is just the beginning of my exploration of the Rocky Mountains but for now we headed back to Calgary to give the little camper a bit of restorative love.