Having wrapped up in Wrangell St. Elias National Park our time left in Alaska was beginning to grow short. We had time for one more destination before heading south to make it back to Vancouver for our good friends Camilla and Mike’s wedding. It was decided that our last stop would be Homer, a fishing and eco-tourism town on the Kenai Peninsula. We didn’t regret it. Homer is incredibly beautiful, particularly on the spit, a man made peninsula. Kachemak Bay, and the peaks and glaciers of Kachemak Bay State Park form a magnificent backdrop in front of colourful buildings. Restaurants serving delicious fresh seafood abound. We enjoyed the best (and priciest) halibut and chips of our lives. The Little Camper That Could fit right in, as everyone in town seemed to drive a 25 year old Toyota or Subaru. 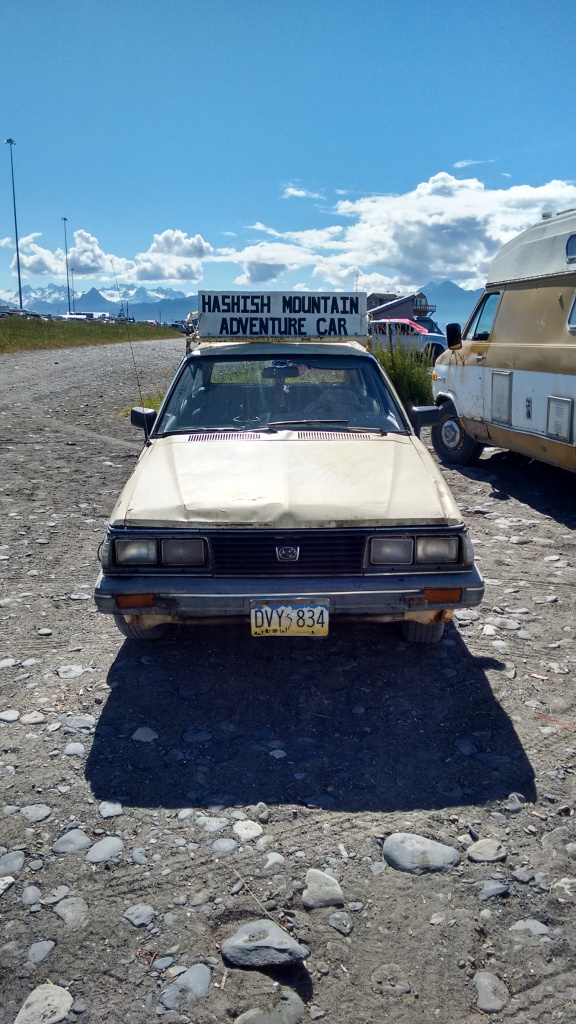 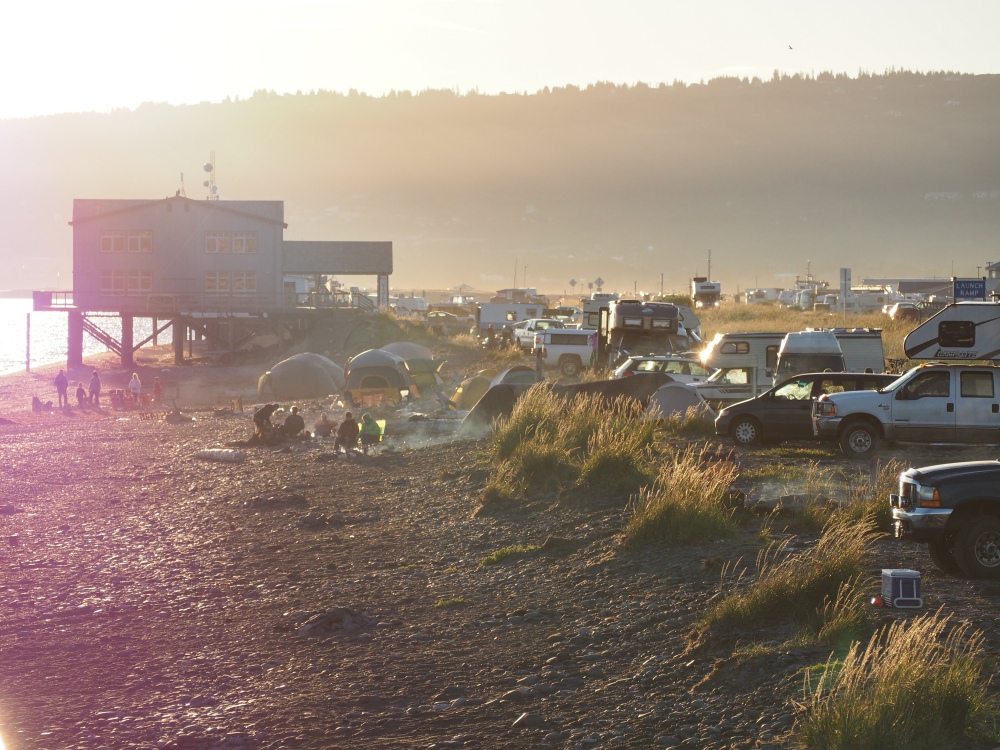 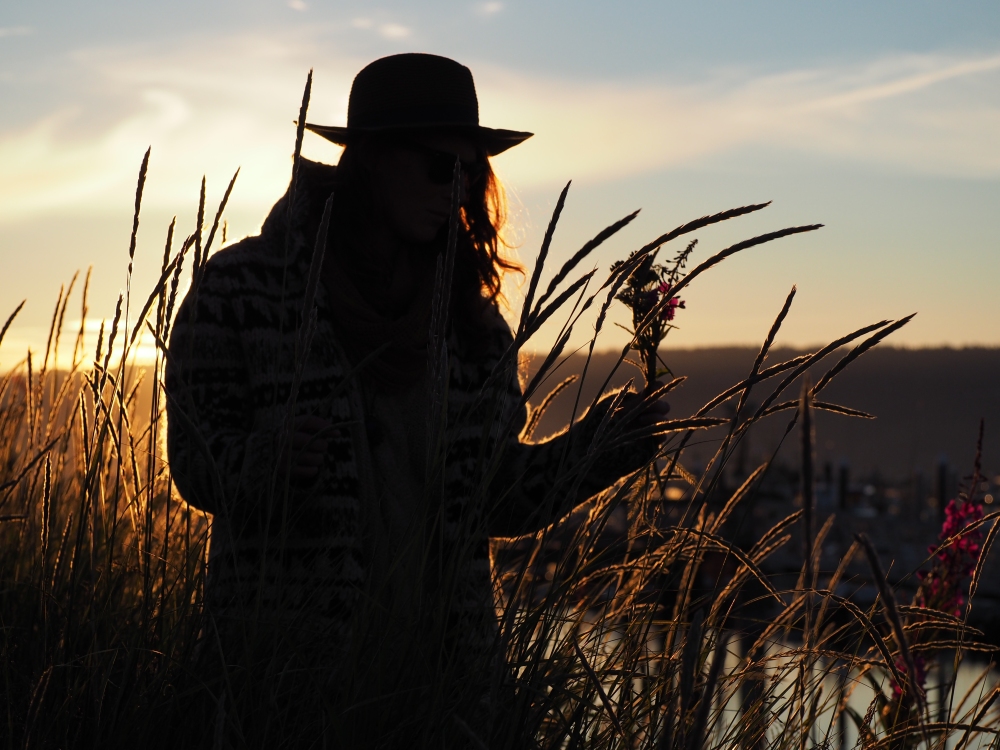 Kachemak Bay State Park is accessed from Homer by boat or float plane. From town China Poot Peak is clearly visible in the foreground of larger glaciated peaks beyond. After a little research this seemed like the best objective to go for in the park. With limited time, and bad weather a few days away there was no time to waste. Rising early on our first day in Homer, I went on a photo mission and found a local water taxi to charter a ride to the park. I made hasty preparations on just a few hours sleep. The last night we were up way to late chatting with our neighbours from Anchorage. It’s easy to loose track of time in the land of the midnight sun. Jessa elected to remain in Homer and go paddle boarding. Minutes before the taxi was scheduled to depart I jumped on my skateboard with pack fully loaded and hiking boots on and raced to the docks, returning once for my forgotten bear spray. Arriving just in time to catch water taxi I was off for a 2-day solo-backpacking mission into Kachemak Bay State Park. 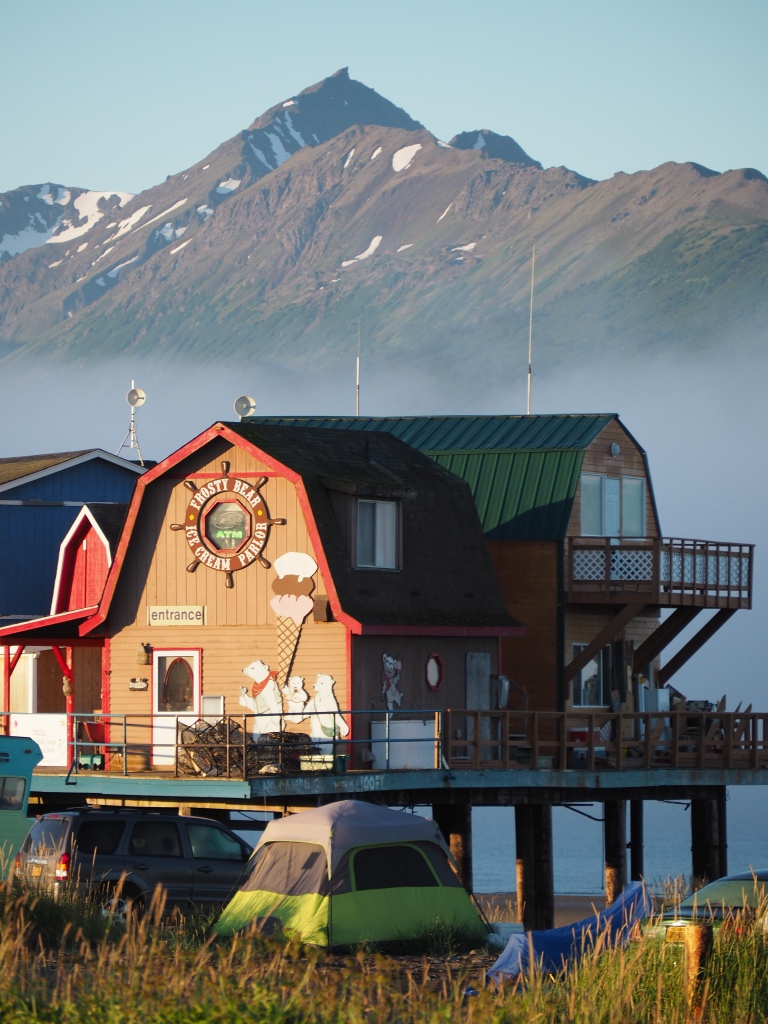 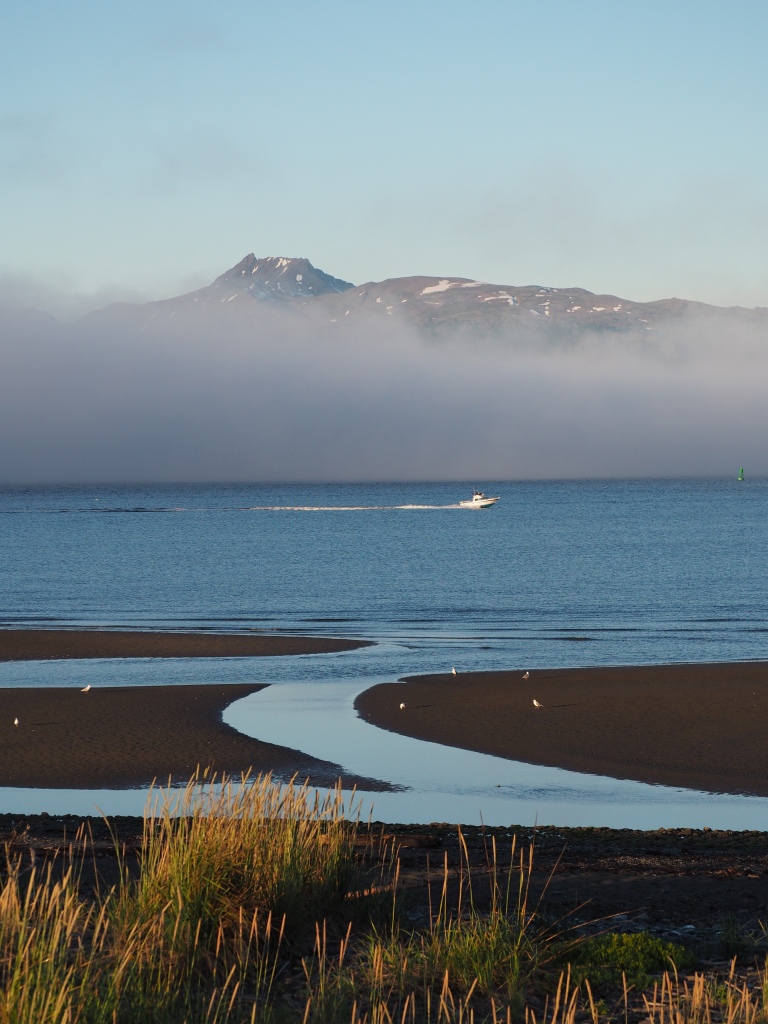 After a beautiful 30-minute ride across the bay I was dropped at Halibut Cove Lagoon. After quickly munching a wrap I hit the trail. The country was similar to British Columbia’s coast. On the trail I saw more bear signs than I ever have in my life and I encountered scat on the trail at regular intervals, sometimes still radiating warmth. There were blueberry bushed everywhere, branches weighed down by berries. Feeling acutely aware of being solo I made frequent bear calls. It was forecast to sock in and rain the next day, so my plan was to hike quickly to China Poot Lake, set up camp there and summit the same day. Hiking solo is excellent for covering ground fast, and I made it to China Poot Lake ahead of schedule. After quickly pitching camp I brought just the essentials and made for the summit. 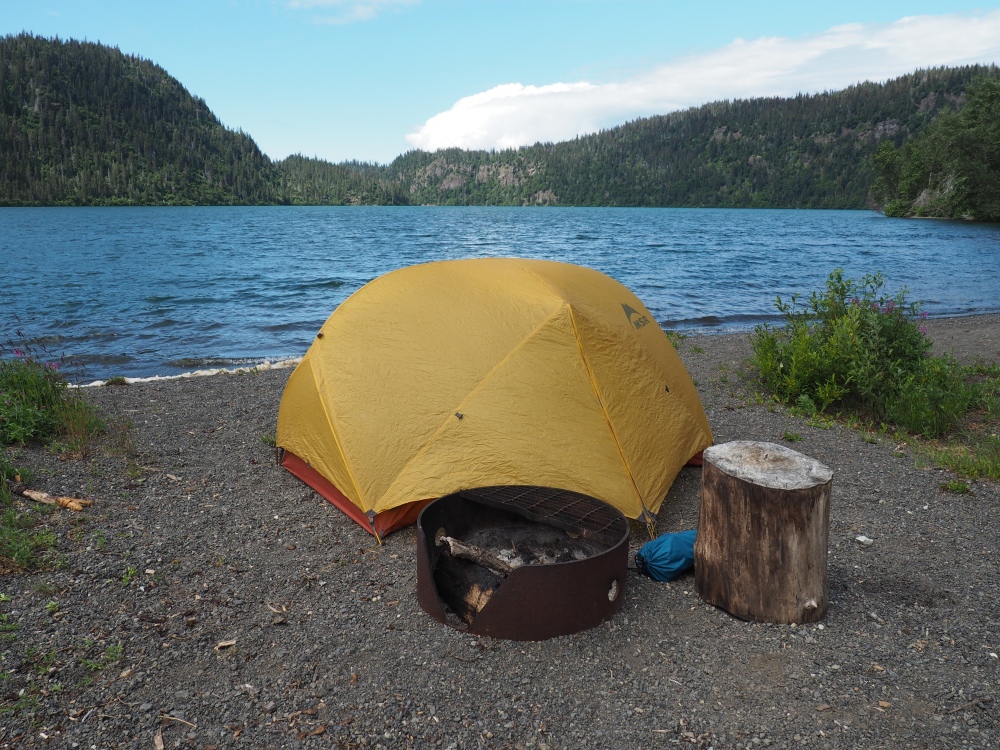 The trail was rugged, steep, and overgrown in places and, as is always to be expected in Alaska, the going was strenuous. I pushed hard, eventually emerging from the forest onto scree for a short, mildly spicy scramble to the summit. I enjoyed lunch on the summit with great views of the Wosnenski and Grewink glaciers to the east and of Homer and the active volcano Mount Redoubt looming in the distance to the west. I was the only person on the summit, but I wasn’t alone. Nearby I spotted a mountain goat enjoying his lunch as well. 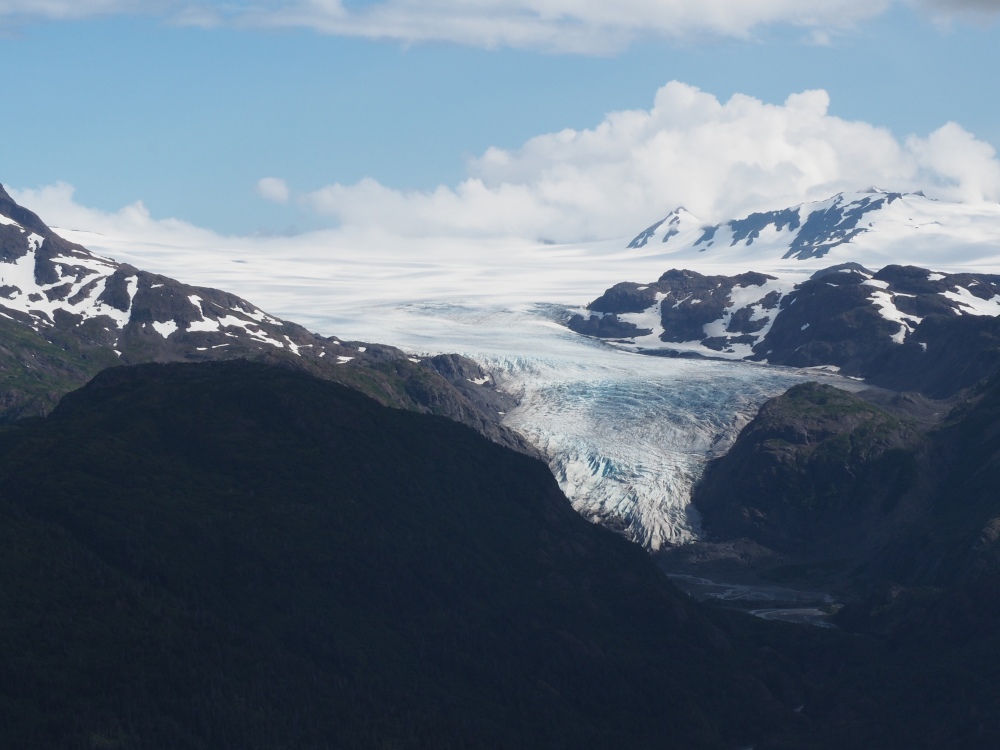 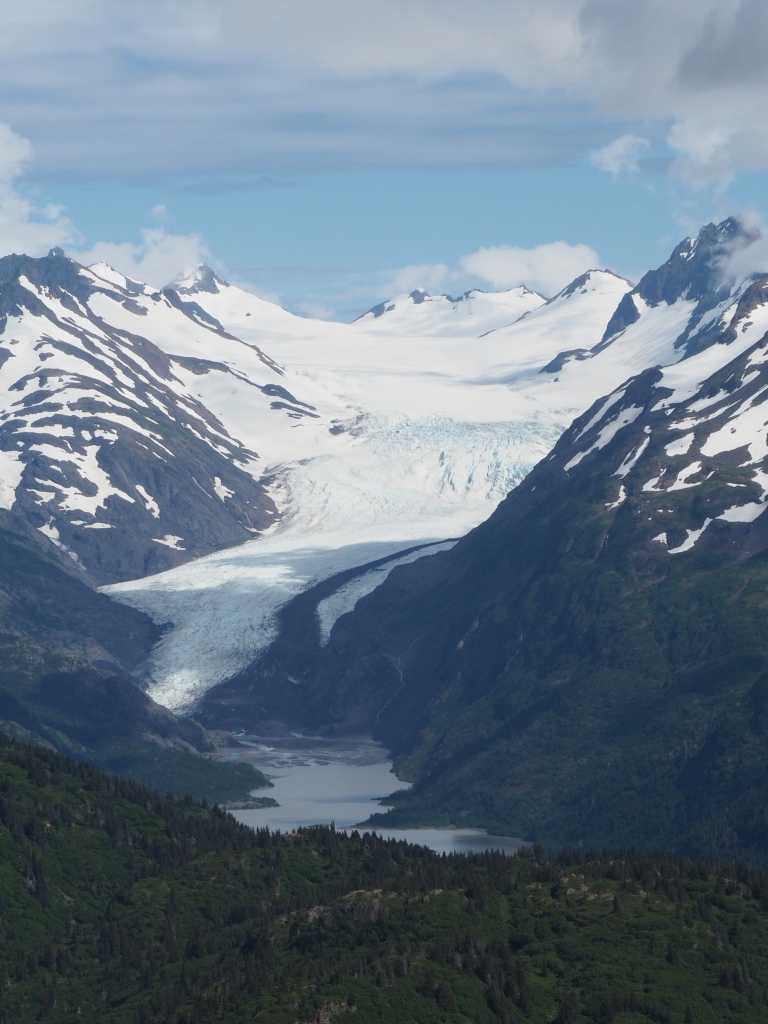 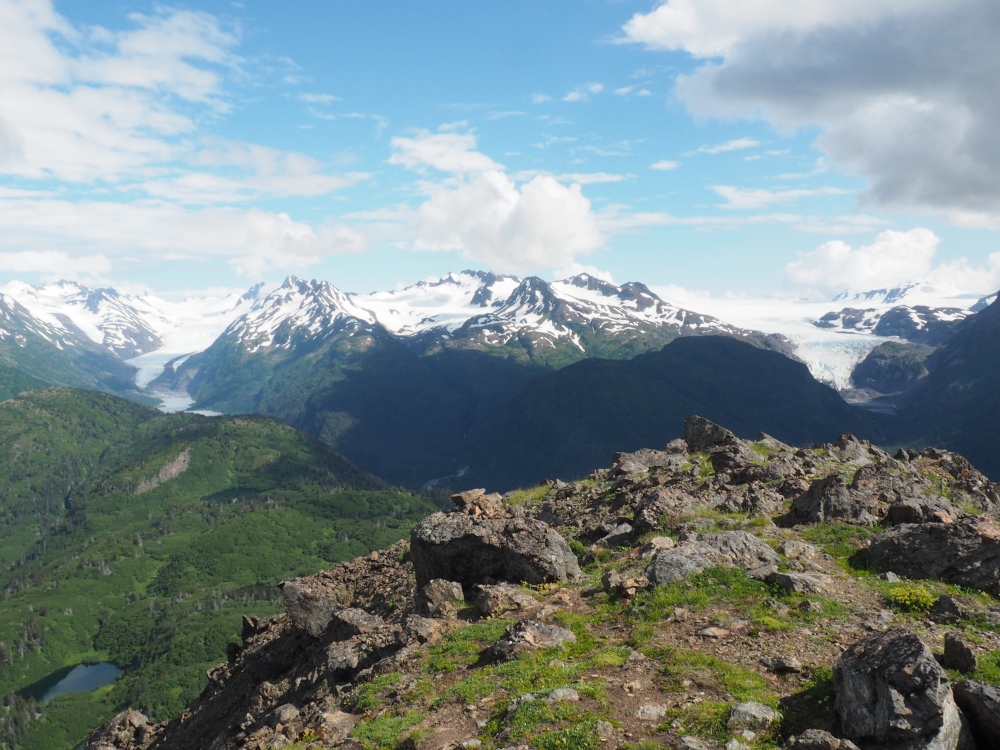 On the descent I allowed myself some time to munch out on blueberries before cooking up a tasty dinner of quesadillas back at camp. The evening was completely still with the glassy surface of China Poot Lake only disturbed by fish jumping. I wished I had brought my rod. The sunset was beautiful, casting warm alpenglow on China Poot Peak and illuminating brush stroke clouds over the horizon. 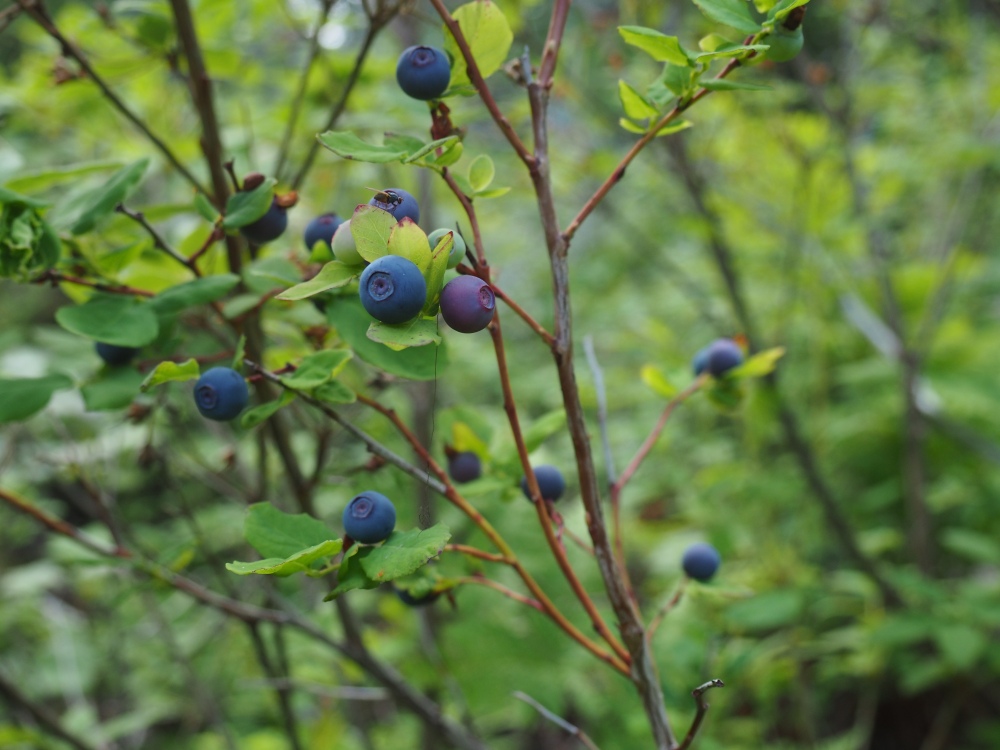 The following morning I woke up to clouds and light rain. I was glad I made the summit when I had the chance. I packed up and made the return hike to Halibut Cove Lagoon to make my scheduled pickup time with the water taxi. By noon I was in Homer again, gazing back across the bay at China Poot Peak with satisfaction. I was in Kachemak Bay State park for barely 24 hours, but it felt like much longer. This marked the completion of our North leg of the journey. Now it was time for the long road road back to Vancouver, and the much longer one on to Argentina.