On our way to Thompson Pass we didn’t make many stops. So close to reaching our goal of skiing in Alaska, we pressed forward with tunnel vision for snow. However, we did notice signs for Wrangell – St Elias National Park along the way. We didn’t think much of it at the time, but during our short visit to Valdez we found some Wifi to learn more about the park. It didn’t take long before it was decided that this would be our next destination. Wrangell – St. Elias Park encompasses over 13 million acres of protected land, and is the largest national park in the United States. It is home to many of the tallest peaks in the country including Mount St Elias, which rises a staggering 5489 meters over just 16 kilometers forming one of the biggest reliefs in the world. To the east the park borders Kluane National Park in the Yukon Territories of Canada, another massive park that is home to Mount Logan, the tallest peak in Canada. The area is blanketed by some of the biggest icefields in the world, in places reportedly as much as 1000 meters thick. All in all it’s one epic wild place, how could I resist. After getting off the Worthington Glacier we had a quick dinner in the parking lot and then hit the road again, this time bound for the gateway to Wrangell- St Elias Park and Preserve; McCarthy, Alaska, population 29.

McCarthy is accessed by driving 60 miles of dirt road, showcasing a wide variety of surfaces ranging from decent gravel to enormous pot holes and some of the worst wash board we’d ever seen. The drive is worth it though; as McCarthy in itself is a destination of sufficient character to merit it’s own blog post. Stay tuned to hear about the local 4th of July parade.

In typical fashion we arrived in McCarthy about an hour and a half before everything closed with a handful of potential objectives in mind, but no concrete plan. We made our way into town and before we knew it had chartered a small plane to drop us off at “The Fosse”, a tiny airstrip west of the Kennicott Glacier the following morning. A local guiding outfit kindly sold us a letter size printout topo map showing a suggested route and 4 sets of GPS coordinates of questionable legibility. Over the next 3 days our route back to McCarthy would take us over the Kennicott, and Gates Glaciers, before traveling through Donaho basin and then crossing the Root Glacier. We had just enough time to hit the grocery store to bolster our food supplies and acquire bear proof containers from the guiding outfit to safely store it. Next we hustled back to the camper to pack our bags.

That night sleep didn’t come easy even though I was exhausted from driving all day and pulling together a mountain of gear and food. We had just taken on a serious endeavour and the haste with which the expedition had been thrown together left me with an unsettling feeling. I ran checklists in my head until my mind calmed enough to go to sleep. Suffice it to say, Jessa’s first ever backpacking trip was going to be an epic.

Morning came all too soon and we groggily we rolled out of bed and hustled to the meeting point. Waiting for us was a tiny silver aircraft built in the 1950s. Our pilot was a gentleman named Gary Green, originally from Kansas, who’d been flying planes in the Wrangells since 1975. Despite the fact that the plane was 60 years old and the nav computer was a smart phone I felt more comfortable on take-off than I have on some commercial airline flights.

We paid a little extra for a sight seeing tour before our drop-off and did not regret it. The views were spectacular as our pilot Gary flew us within a few hundred meters of the largest icefalls I have ever seen and the crumbling abandoned Erie mine site perched precariously a thousand meters above the Root Glacier.

When it came time to land he smoothly put us down on an impossibly small runway slotted between a moraine and the adjacent mountainside. A few quick snap shots with Gary and the plane and he was off again, the drone of the motor quickly fading to silence. 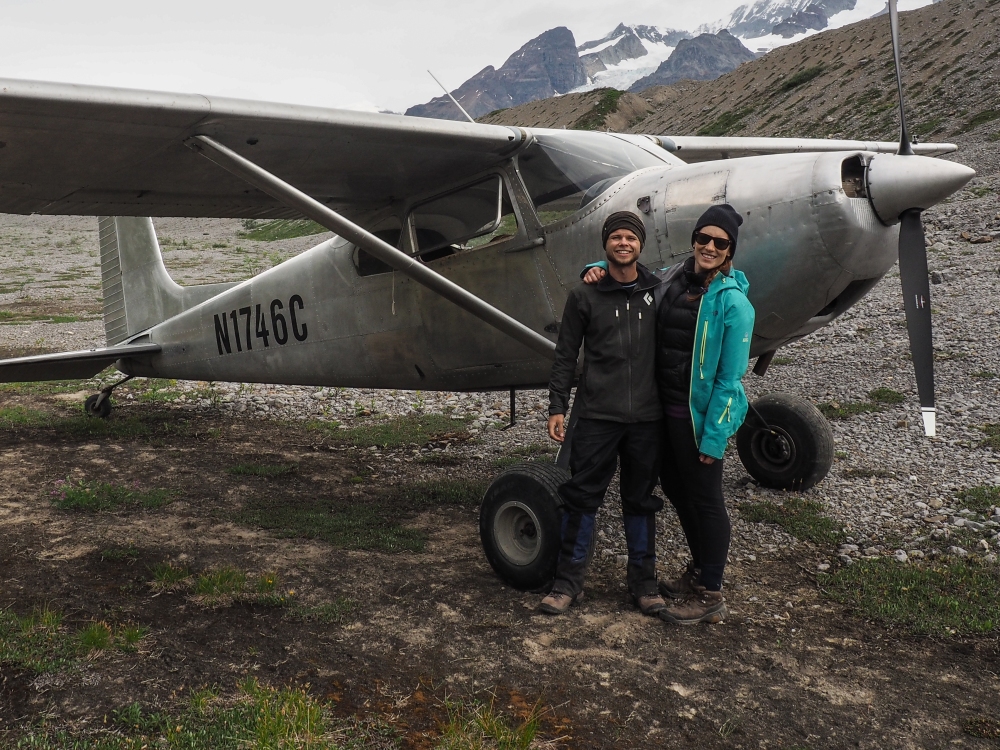 We hiked to the top of the moraine to get a look at our route. The Kennicott glacier stretched out in front of us, an ocean of ice and rock flowing inexorably down from the slopes of Mount Blackburn and it’s neighbouring peaks. I had the feeling of being very small which comes from being in truly wild places. The day’s objective was to cross the glacier and camp on the other side, a distance of about 3.5 miles as the crow flies. No big deal.

2 thoughts on “Wrangling the Wrangells: Part 1”