Volcan Cotopaxi is one of the most iconic mountains in the world. It’s conical shape is classically aesthetic and the archetype of what a volcano should look like. It’s also a great non-technical alpine ascent which I would have loved to complete. Sadly, when I passed through the mountain was closed as it is currently in the midst of an eruption cycle. The park was still open though, so I decided to head there and get a look at the view myself and see if I could hike a smaller volcano called Ruminahui across the valley from Cotopaxi. When I arrived at the south park gates I was dissappointed to find them closed, and that camping was not currently permitted in the park due the risk of eruption. The park was still open for day use though and the friendly ranger let me park outside the ranger cabin for the night. It was one of the precious few cold nights I had experienced in the camper since Alaska and it felt good to break out the feather duvet and bundle up.

In the morning I awoke to a thick fog and started the slow crawl into the park. The camper’s 2.4L engine doesn’t have too much pickup in the thin air above 3000 meters. Slow and steady I drove up towards the Laguna de Limpiopungo parking lot and eventually climbed above the fog revealing Cotopaxi National Park’s beautiful highland landscape. The road wound it’s way through rolling and arid grassy plains. On the right the slopes of Cotopaxi rose up into the clouds, disappearing just as the glacier began to show. On the left the peaks of Ruminahui sat just below the cloud cieling. On the planes horses grazed and ran alongside me as the movement of the camper spooked them. I arrived at the parking lot, packed a day bag and started off around the lake to find the trail up to Volcano. I spotted the peak of Cotopaxi for about one minute as a window opened in the cloud, then it was gone. I felt grateful to have seen it at all. On the way I met two friendly Colombians named Luis and Pablito who had noticed my BC plates in the parking lot. They were only planning on walking around the lake, but decided to join me on the way up to the volcano. They came as far as the view-point above the lake. From there we said our goodbyes and I hustled on to make the summit before the park closed at 3pm. The trail followed a grassy ridge until the mountain steepened and became rocky. From there it was a short but soft scramble to the summit, I started to feel the altitude as I took one step back for every two forward. I made the summit at around noon and had lunch while taking in the park’s arid highlands to the east and the green, cultivated rolling hills to the west. Cotopaxi still hid in the clouds. Soon it was time to head down and return to the south park entrance for the night.

As I arrived at the car I noticed that Cotopaxi’s north side was clearing, and the light was beginning to get really nice as the sun dropped. On an impulse I turned North instead of South in search of a better look at the volcano. The road was bad and washboarded but I was rewarded with one of the most spectacular drives of the trip. I couldn’t resist a little camper photoshoot in front of Cotopaxi as it got clearer and clearer.

At this point the park had closed hours ago, but I was in no hurry to leave. I drove slowly North taking it all in. Eventually I came across a group of teenagers from Quito and a gentlemen named Murray from South Africa taking drone footage of the park for a school project. They were nice enough to film some follow along footage of the camper and promised to send it my way. Eventually I reached the south park gate and was pleasantly surprised to find out that I could camp just inside the gate, with a magnificent view of Cotopaxi now glowing in the sunset almost completely free of clouds. It was a dream camp spot.

In conversation with the park ranger I naively mentioned that I had passed a group filming. Apparently this is against the rules in the park. I tried to convince him to forget about it, but he wasn’t having any of that. He assured me that he would just ask them to stop filming and that they should delete the footage, before heading off in a truck to look for them. I learned later that the park confiscated all of their film equipment. It seems like an excessive measure to me. Is it really in the spirit of conservation to take the cameras from some kids doing a school project with the intention of documenting one of the world’s most beautiful natural places? It added a sour note to an otherwise perfect evening as I regretted accidentally ratting on the stoked and friendly film crew. 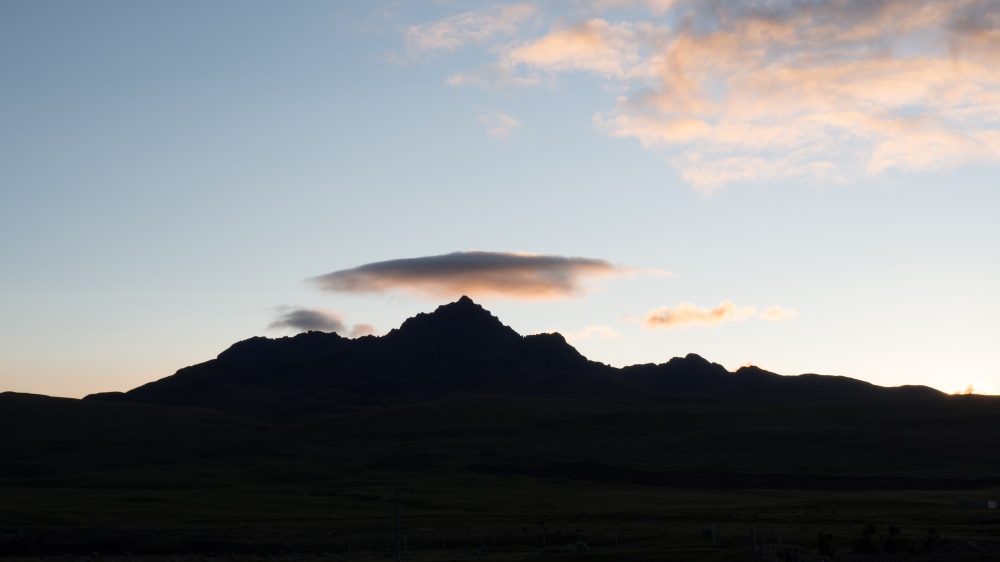 In the end my short trip to Cotopaxi was spectacular, even without being able to summit the peak. Later I learned that although the mountain is closed in the park, the south access to the peak is privately owned, so there are no restrictions if you climb that route which is also non-technical. At your own risk of course. Cotopaxi was quiet when I was there, but I did see it smoking later from a distance.

One thought on “Cotopaxi National Park”